Student Fees Protest: A View From The Front

By Londonist Last edited 110 months ago
Londonist Student Fees Protest: A View From The Front 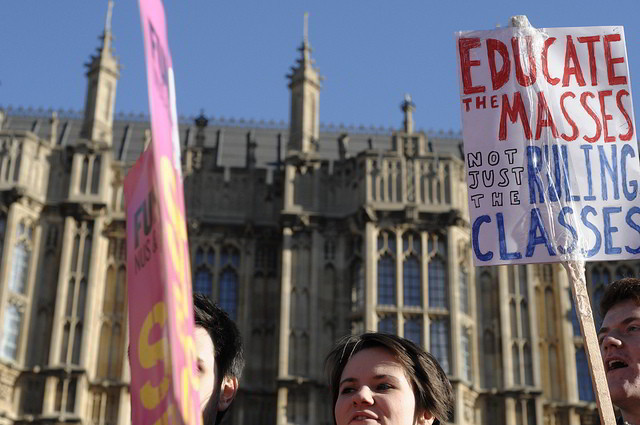 Apparently the government have been surprised at how little public opposition there's been so far to their programme of austerity cuts. Well, yesterday, as thousands of student protesters laid siege to the Conservative party offices, smashed windows, occupied the roof and lit fires and flares in the courtyard, the Tories couldn't avoid the opposition.

The protest against tuition fee increases and education cuts was organised by the National Union of Students and the UCU lecturers' union. The march was big and lively from the beginning. As 50,000 people assembled near Whitehall from 11am, NUS president Aaron Porter told the dancing, drum-beating, whistle-blowing crowd: "This is a class war, it's time for students to fight back". Later in the day Porter would be condemning his members as "despicable" for smashing the windows at 30 Millbank, home of Tory party HQ.

Being a student protest, this was a more lively, colourful and creative affair than your typical union march. Home-made placards with witty slogans everywhere: "Conservatives, putting the N into cuts", "Lidl won't save us", "What you talkin bout Willets?", "This banner would be more creative if it wasn't for arts education cuts", and "Nick is a bad Clegg".

There was a particular venom reserved for Clegg and the Lib Dems who traditionally rely on large student votes in uni towns, because the Lib Dems promised students before the election that they'd oppose tuition fee increases. If yesterday's protesters were at all representative, the Lib Dems should be pretty worried about the next general election.

Caz, an LSE postgrad student, described the students' anger, "We're just all so angry, and it's not just for us, but for the younger students, college students who'll have to pay these fees. It's always the poor who are made to pay. People here feel let down by Clegg, but this was always going to happen. They're all Tory scum."

Jonny from Brunel University said he hoped for something like the recent protests in France. "It's about time students here got angry like in France. The government are taking our futures away from all of us, we shouldn't just sit back any more."

This protest was not just significantly bigger than previous tuition fee demos, which have been an almost annual event since 1998, but yesterday was qualitatively different as well. The protesters were younger, with large contingents from FE colleges and sixth forms, and there were delegations from various trade unions; teachers, firefighters, local government workers, all marching in support. People felt this was big and important even before the events at Millbank.

And, despite the fires and smashed windows at the Conservative offices, the mood remained good, upbeat; this really felt more like a carnival than a riot. For all the inevitable press hype about violence, the only real violence was directed at protesters by the police. The occupation at Millbank had begun with a peaceful, almost polite, sit-down in the lobby but escalated when police charged in to remove people. The police soon realised they'd underestimated the anger and militancy of the students; wading into a crowd waving metal batons around is a sure way of turning peaceful students into window-smashing rebels.

It's easy to be cynical about student protests, they've got it easy after all, they're the privileged few; they are, as a BBC reporter said, "the sons and daughters of middle England", right? Maybe some are, but being a student today is not the easy life of twenty years ago, and tuition fees of £9K a year on top of effects of cuts will cause real hardship or completely cut off the chance of higher education for many.

The 10,000 protesters who laid siege to Millbank or the 200 who got inside or 50 on the roof were, of course, a minority of the protest; but the anger and passion on display was undoubtedly representative of the 50,000 who marched. And there will be many more; students and non-students; workers and unemployed; disabled and pensioners, who share that anger at the government's austerity cuts. As Tim, a protester from Bristol, said "Hopefully people will see this on the TV at home and think, we should be doing that too, the people facing the dole or benefit cuts." Maybe they will. One government source told the Guardian, "This is just the beginning. This is the first of a series of protests by various sections of society against what we are doing. The problem is this sets the benchmark for other protests." Maybe yesterday's protest is the beginning of something big. And maybe people have a right to be angry and militant.