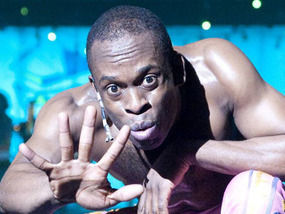 The show kicks off with a breakdown of Afrobeat music, the instruments, musical influences and dance moves- including some of that oft-dreaded audience participation. The first half focuses on Fela’s early life as he travels to the U.K and U.S and is awakened to Black Power, and better understands his mother’s political work. The numbers are high-energy and positive, the band energetic and the dancers polished. Interwoven between these are ‘down’ moments where Fela interacts with the audience, telling stories, anecdotes and gently jibing the crowd (‘Who here has been in handcuffs? Was it the police?’) with excellent comic timing.

The second act is more serious as the violence and political repression increase. This act actually seems more cohesive and the numbers more compelling; the ‘Storming of Kalakuta’ and especially the ‘Dance of the Orisas’, where Fela uses a traditional Yoruban Vodou ceremony to communicate with the spirit of his mother, is disorientating and powerful. There’s further support from the set, decorated as Fela’s Lagos club The Shrine, with masks of the gods and pictures of ancestors, which cunningly double as video screens with footage of rioting, changing currency rates and oil prices from which oil drips like blood, referencing the stranglehold of military dictatorship. The screen was also used to display lyrics, which was a little distracting at times.

The dancers make good use of the stairs and levels within the auditorium, and we always appreciate the technique of sending actors on stage before the performance or during the interval to capture interest. Ours was occasionally lost by the some shallow characterisation (always much harder to achieve in a musical) but overall, Fela! is an enjoyable evening.

Fela! is on at the National Theatre until January 2011.