London Poetry: You're Not Cool Enough To Be In My Band By John Osborne 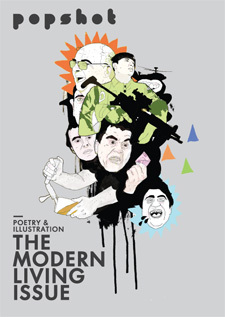 John Osborne is the author of two books, Radio Head and The Newsagent's Window, both published by Simon&Schuster. He has had poetry published in the Guardian, The Spectator and the Big Issue and has performed at festivals including Glastonbury, Latitude and the Edinburgh Fringe. His first pamphlet, What if men burst in wearing balaclavas?, was published earlier this year by Nasty Little Press. His show, John Peel's Shed, is on at the Rosemary Branch Theatre tomorrow.

This poem was published in Popshot Issue 4 - The Modern Living Issue. Popshot is a poetry and illustration magazine that showcases the poetry of today and tomorrow with the moral support of illustration wrapped tightly around it. Selected poems are collated and individually sent out to illustrators who then illustrate the poems according to their interpretation of the piece. These illustrations are then bound together with the poems into a small portal of literary and illustrative goodness.

You're not cool enough to be in my band 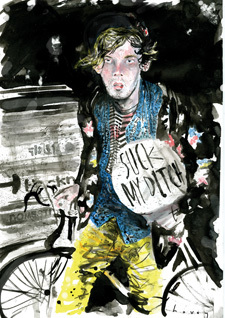 Illustration by Tom Hovey
A man with Kate Moss cheekbones

told me to leave the Soho boutique

and never come back.

fashion magazines fling off the shelves

so they don't have to be touched by me.

The landlord of our local spread his arms out wide

and said "sorry, you have to be 'this cool'

to drink in here."

So I'm going to bomb a gram of drum and bass

and stop texting people on their birthdays.

This poem was written after a night out in Shoreditch and, to the poet, was a brutal realisation of how uncool he was. Popshot Issue 4 - The Modern Living Issue is available to buy for £5.50 + p&p.