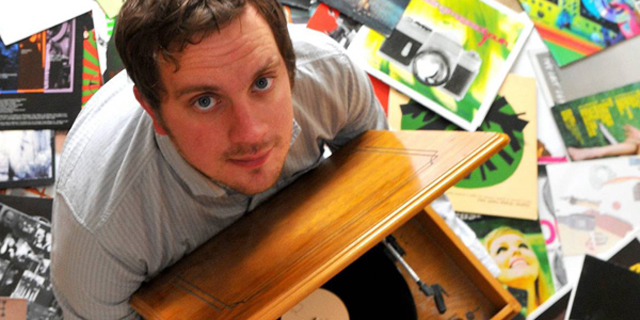 In 2002 John Osborne won a competition on John Peel's Radio One show. His prize was a box of records from Peel's shed, which took eight years to listen to. Not surprising really, as the vinyl piled 4ft high. Nestled amongst a fair proportion of German heavy metal lay the likes of Royal Trux, Pere Ubu, Los Sonámbulos and Chilly Gonzales. Osborne was inspired to create a radio show out of the best of them following a research visit to Norwich based Future Radio.

John Peel's Shed, partly adapted from his debut novel "Radio Head: Up And Down The Dial Of British Radio" is his first solo stage show (he's a regular performer with poetry "boyband" Aisle 16).

"Osborne perches on the edge of his armchair reading the sleeve-notes of a record by a Boyzone punk covers band called 'Oizone'. On a side table opposite, sits a portable radio and a glass of wine. At his feet, a crackling record player. Scattered around him like a teenager's bedroom, lies several dozen records. John clears his throat, and begins...."

Featuring a selection of records previously owned by the late, great John Peel including many rare recordings by obscure and now defunct bands, the show is an ode to radio and those records. It is also a unique opportunity for Peel fans to relive evenings religiously tuned in to the wireless on Peel nights awaiting new music that was to either excite and/or assault the ears.