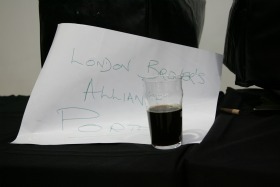 Want to start a good pub debate? Try discussing what's in front of you. If you’re quaffing a pint of Porter, you’re imbibing fairly contentious stuff: there are not only debates as to its origin, but also its composition and even its name.

A popular rumour, dating from the late 18th century, holds that a Shoreditch brewer called Harwood invented the drink to replace something called ‘three threads’, which was a mixture of ale, beer and ‘twopenny’ (a strong beer costing -surprisingly- 2p). His discovery is often dated to 1722, although confusingly Dickens’ publication All The Year Round, which happily propagates this story, at other times claims dates its creation to both 1731 and 'the time of Queen Anne’ - which would place it at 1714 at the latest.Other sources, however, claim that London brewers -who had traditionally produced a heavy brown beer - came up with Porter to compete with the popularity of pale beers from the countryside. From the early 18th century they produced a more mellow, hopped brown beer that was aged at the brewery rather than -as traditional - at the pub or dealer's. It was from this method of cask ageing, and the fact that it was made from an entire set of mashings, that the concept of an 'intire butt' beer originated, rather than because it was no longer a combination of 'three threads'. For an in depth review of the debate, you could do worse than starting here.The name's origin is also a point of contention, with the two most popular theories being that it was either named after the porters who loved it so much, or after the fact that it was ‘portered’ around in pewter vessels by pot-boys who would have delivered it to homes and businesses. Whatever the truth, both aforementioned types of labourer would have benefited from this healthy beverage, which enabled ‘London Porter drinkers to undergo tasks which ten gin drinkers would sink under.’So what do we definitely know? Porter originates from around the start of the 18th century, was first brewed in London and was exceedingly popular: from mid 1786 to mid 1787 the 24 chief porter brewers in London produced a staggering 1,176,856 barrels between them. It was one of the first industrial beers and originally brewed in giant vats such as that allegedly owned by the Griffin brewery (now Fullers), which could hold up to 20,000 barrels of Porter. Eventually, however, historians note that brewers stop maturing the whole batch and instead combine small amounts of aged Porter with fresh, thus producing a similar product for a cheaper price. (Indeed, this may have fuelled confusion over the existence of 'three threads' and other mixed beers that Porter 'replaced'.)Porter was brewed using dark malts and tended to be a strong beer, but increased taxation on malt meant that it became gradually weaker as time progressed. Although most recipes are on broadly similar lines, ingredients such as capsicum, Cocculus indicus, and ‘salt of steel’ have all made alarming appearances and, despite assumptions that it was made with Thames water, breweries actually used water extracted from below London’s clay basin: Hoare’s brewery, for example, drew theirs from a well over 400ft deep. Flavours traditionally associated with the drink include liquorice, chocolate and caramel, and contemporary sources recommend that it is drunk out of pewter or silver pots, as an electro-chemical reaction was said to enhance the flavour. It is also worth noting that the popularity of this full bodied, dark beer led to the creation of numerous variations including stout, or 'double porter'.Although Porter's popularity declined after the 1860s, it has experienced something of a renaissance in the last 40 years and is now produced by many breweries, including London's Kernel and Brodie's. Adding a frothy cap to this long history is the recent 'collaborative Porter' produced by the London Brewer's Alliance, which according to Paddy Johnson of the Windsor & Eton Brewery, used 3 different types of hops and 5 different malts. Every brewer brought their own experience and recipes and, as he notes ' Porter appears to have had a very wide range of styles both in colouring and hop rates so the debates were lengthy as to what we should do!' Although you might think that it would be a case of too many cooks, they produced a traditional yet citrussy porter which was both palatable and refreshing - although we can't claim it made us any stronger! If you want to try it for yourself, check out their website or visit pubs such as the Bree Louise while stocks last.