The geeks shall inherit the Earth, as Ben Goldacre is fond of saying. With the launch of Geek Calendar, they'll at least achieve temporary prominence on a few office cubicles and kitchen doors. But Caprica wasn't built in a day.

Geek Calendar champions British nerdiness in all its glory, from Jonathan Ross fiddling with his figurines, to Chris Addison inspecting a moon rocket, via geek couple Brian Cox and Gia Milinovich battling a 1950's toaster. To be a geek is no longer to be an outcast, it is a lifechoice to celebrate. As Brian Cox puts it: "The definition of a geek is being fascinated by the tiniest and yet most wonderful things.”

The calendar spans 14 months (Dec 2010-Jan 2012), two shy of achieving a hexadecimal year, which would have been satisfyingly apposite. As well as making the perfect gift for the nerd in your life (perhaps yourself), you'll be showing support for a very good cause: reform of the libel laws in England and Wales, an issue that all of the models in the calendar support (for more on that debate, see here). Every penny of profit will go towards the campaign.Want to mingle with some of the prize specimens of ingenuity in this country (plus one or two members of the Londonist team)? We've got 20 pairs of tickets to the launch party to give away. The event takes place on Thursday night from 7pm in the Clerkenwell area. Venue details will be given to winners.To enter, simply email hello@londonist.com with subject heading 'Geek Calendar' and your full name. The first 20 to reach our inbox get to go (with a plus-one). If you're not quick enough, you can easily get hold of a copy from the calendar's website.Here's the complete list of geeks, placed in order of name length when typed out in Arial font. (Can you tell we're pitching for inclusion next year?) 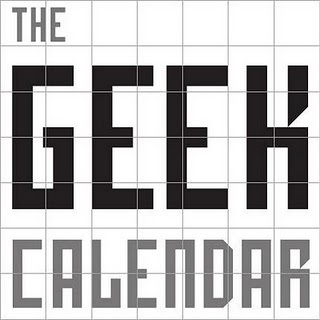 All the shots were taken in London (if you can guess any of the locations in our gallery above, leave a comment below).

Follow Geek Calendar on Twitter.Note: this competition is not sponsored or paid for in any way, and is posted in solidarity with the campaign to reform libel law. And because we love, and are, geeks.