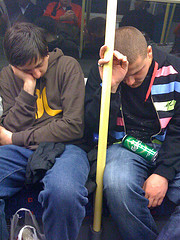 This morning brought the news that Boris Johnson is lobbying the government for stronger powers to deal with London's unusually large contingent of drunks.

The plan, borrowed from South Dakota, would see anyone convicted of an alcohol-related offence tested for blood alcohol twice a day, and jailed if found to be unsober. This, deputy mayor Kit Malthouse claims, would be cheaper than the money currently shovelled into tackling the problem through policing and the NHS.

Perhaps. But merely criminalising the terminally bladdered seems, to us, to only tackle half the problem. If London is really to shake off its drinking problem, then our wobblier friends need to be given every incentive to quit the demon drink.

Here are a few we came up with:

This problem, though, clearly requires a city-wide effort. All other suggestions gratefully received in the comments thread.

Photo courtesy of Foist under a creative commons licence.