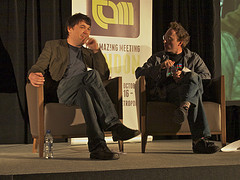 A couple of thousand (or so it seemed) geeks, rationalist, humanists, atheists, scientists, psychologists, politicians, comedians and magicians gathered together at the Hilton London Metropole Hotel over the weekend for the second annual The Amazing Meeting London (TAM London).

This ragtag coalition is ostensibly a meeting of ‘skeptics’ - a growing movement of people from all walks of life who uphold rational thinking and evidence-based approaches to improving our world.

Biggest applause (and standing ovation) of the weekend went to 15-year-old Rhys Morgan who almost single-handedly investigated and campaigned against the makers of a quack treatment (which turned out to be mostly bleach) for Chron’s disease. He received a special grassroots skepticism award from Randi. The world needs more people like this.

Further summary of a meeting so broad it encompasses everything from homeopathy to ghost hunting would be fruitless (and besides, Martin Robbins has already done a good job at the Guardian), so here, lazily, is a selection of our favourite quotes from a meeting that oozed them.

"I’ve never seen the Watchmen movie cos I prefer to critique something from a position of absolute ignorance” - Alan Moore.

"We shouldn’t be gratuitously obnoxious; we should be purposefully obnoxious.” - PZ Myers.

"The internet used to be like hanging out in a bad area at night, you walk over to a nice lady and get mugged by pop-ups. And then Twitter came along and it just sorted things out very easily. For instance the mad bastard problem is fixed by the block button. And the fear of the block button means that people are very polite.” - Graham Linehan.

"The Lord of the Rings is boring. It's basically just a film about walking." - Adam Rutherford.

"When they [the Alpha Course] say homosexuals can be cured, we have an answer to that: fuck you." - Adam Rutherford.