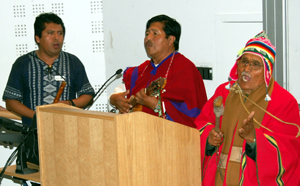 This week, a public conference with indigenous leaders took place at SOAS. Focused around the global and environmental crisis and asking ’Is this crisis circumstantial or pointing to the end of a cycle of time for humanity', the leaders from South and Central America shared their innate wisdom on the subject with an over-subscribed audience.

In collaboration with the SOAS Student Union, the Native Spirit Foundation were able to host a panel of indigenous elders from Maya (Guatemala), Kuna (Panama and Colombia), Aymara (Bolivia) and Mapuche (Chile) peoples. The eldest of them was 115 years old!

These cultures are still very connected to nature and ancient wisdom, with changes, climatic and otherwise, more obviously and devastatingly affecting their way of life. They were all in agreement that we are arriving at the end of a big cycle of time where a great social, political, economic and environmental change will be gone through and where reawakening to Mother Earth is key to human survival. Rather than seeing this ‘end of an age’ as apocalyptic, they see this as a synchronisation of time in relation to the planets. ‘‘The prophecy of the Condor and the Eagle’ says that a union of the indigenous peoples from the Americas will take place for the greater good of mankind. The Aymarians go a step further and predict the ‘emergence of a new human being after a period of great confusion’. Going by the Mayan calendar, they put this date at 21st December 2012 - the day of the sun and the end of a 5525 year cycle.

Even though they spoke in Spanish (translated) it was easy to connect with their passion, wisdom and deep respect for Mother Earth. They expressed the plight of the universe poetically from the heart. ‘Life is a ceremony’, one said. Another ‘ to respect and learn from the wisdom of your elders - they are the memory of nature and community’. ‘ Our spirituality is not religious, it’s us in communion with the universe’’ and ‘no documentary about us can take the place of coming here and talking directly to you’. The evening was one of hope, joy, and laughter despite the seriousness of the subject, and ended with an informal performance of music and song.

There are a series of workshops running this weekend related to topics here, all part of the Native Spirit Festival