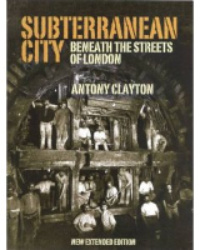 Tubes, tunnels, bunkers and bolt holes. Buried rivers, bank vaults and prison cells. Pneumatic conduits that once funneled capsules at 40 mph, and the disused tube network of Royal Mail. There's a lot more to London than we ever see, with thousands of miles of passages, sewers and pipes comprising a de facto subterranean city, normally only seen by maintenance works and lucky Londonist writers.

Anyone who witnessed the queues for the recent Illumini event at Shoreditch Town Hall, which celebrated all things hypogeal, will have seen first hand just how much interest there is in London's underbelly. One of the speakers was Antony Clayton, author of Subterranean City, arguably the most comprehensive book on the subject and now reissued by Historical Publications.

Clayton's tome was first published a decade ago, when the Jubilee extension was still minty fresh, the Channel Tunnel rail link remained in planning, and Crossrail was even more of a pipe dream. Ten years on, and the author has burrowed deeper and opened his own new extension, with an additional 70 pages and 80 illustrations (many of them new to us, despite years of reading similar material).

This is an impressive body of research. In a subject rife with roumour and hearsay, it's good to see such rigorous use of references and footnotes. The illustrations, as already noted, are well chosen with plenty of maps and diagrams that provoke 'I didn't know that' moments. In fact, our only criticism - and it's down to personal taste - is the generous space given to rail networks (almost half the book) while equally fascinating subjects like the London sewers receive only part of a chapter.

Regardless, this is an essential addition to the bookshelf of any curious Londoner. We're already looking forward to the Crossrail-heavy third edition in another decade's time.

Subterranean City: Beneath the Streets of London is available now from Historical Publications. Buy now on Amazon.

Like this? We also recommend Underground London by Stephen Smith - a journalistic, light-hearted romp through some of the underground spaces mentioned in Clayton's book.