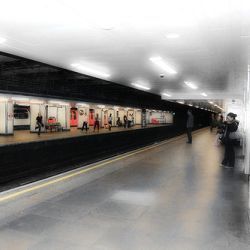 The flying piece of plastic that injured three women at Mile End tube station last November has bounced back into the news. One of the injured women has sued London Underground (LU) for damages; she suffered a 5cm cut on her forehead when a plastic barrier between two carriages on a train pulling into the station flew off and hit her. The amount she will receive is not confirmed, neither is settlement in or out of court confirmed. Meanwhile, the Office of Rail Regulation (ORR) are prosecuting LU for breach of Health & Safety regulations. In a fairly resigned tone, LU is ready to admit guilt and will face a fine, up to £20,000 according to ORR.

After extensive investigations and lengthy recommendations on how to avoid anything like this accident happening again, all parties involved have promised that nothing like this will happen again. It really can't - who could afford it? Always better to be safe than not safe and massively out of pocket, yes?

Photo of Mile End station by sukesukesue from the Londonist Flickr pool.