The Pope's Visit To London: Reviewing The Previews 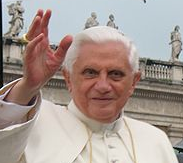 Photo / Tadeusz Górny
Pope Benedict XVI fetches up in London this week, part of the first papal visit to Britain since John Paul II came to glad-hand the faithful in 1982. But that wasn't a state visit, so Benny's trip is a bigger affair, despite some events not selling as fast as anticipated. Our local and national media have been crunching out the page-filling previews, and here are the best (and worst) of them:

The Guardian has a fairly useful editorial piece detailing what to expect, and a less useful Flash-based "interactive" guide, although the interaction mainly consists of clicking through a series of infographics on the cost of the visit, the history of papal visits to Blighty, and (being the Guardian) a timeline of recent Catholic controversies. But this pales in comparison to Channel 4, which goes for the jugular with a map of Catholic abuse in England and Wales.

More helpful is the interactive site offered by The Telegraph, which plots the Pope's movements on a Google map. They've also got a couple of useful if worthy infographics on British Catholicism by numbers and a history of the religion in this country.

What do those lucky enough to peek behind The Times' paywall get? Not a lot for their money. There's a 'instant expert' guide, and precious little else. The BBC has gone for the human angle, talking to the man who was in charge of John Paul II's security in 1982, and canvassing the opinion of London's Catholics.

The Evening Standard got off to a flyer last week by featuring a map that locates Lambeth Palace, where the Benedict XVI will begin a trip to Parliament, on the site of a Vauxhall gay club; could this be the reason that Mel Gibson's father called the Pope a "slippery gay"? Sadly, the rest of the Standard's guide isn't as enjoyable. Their neighbours in Northcliffe House, the Daily Mail, take an in-depth look at the Mercedes-built Popemobile that will ferry the man around during his stay.

If you want protest against the Pope pulling into town, there are plenty of options, depending on what part of his worldview irks you the most. Protest The Pope is an umbrella organisation linking the disparate strands of anti-papal endeavour. The British Humanist Society has organised a gathering outside Downing Street to coincide with the Hyde Park prayer vigil, where the likes of Ben Goldacre, Richard Dawkins, and Johann Hari will pontificate on the point of the pontiff. The National Secular Society has a protest march planned. There are also a number of events planned at Conway Hall, including a Nope Pope Party on Friday night.

Will you be out to cheer or jeer the Holy Father?