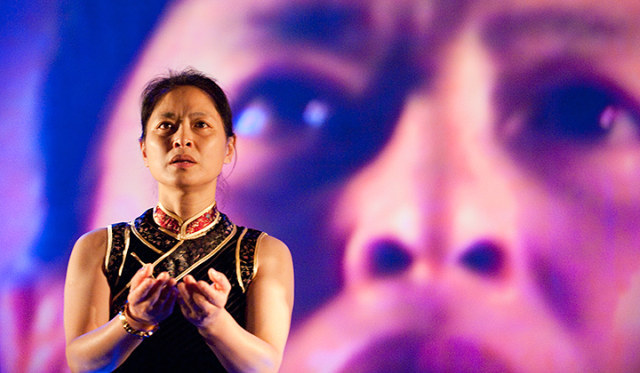 Starbucks, wheelie suitcases, airport lounges, emails, Four Seasons hotels are identical, wherever you are. But the people drinking coffee, pushing their cases through passport control, into cabs then into international hotel chains are each unique; they connect and overlap with unexpected consequences. Re-Orientations takes an international cast speaking four languages and explores globalisation in a deeply felt, powerfully performed, beautifully staged production.

A couple take their Swedish language Miss Julie to Shanghai, where English manager Julian is running things; he is also looking for missing daughter Alex. Alex's mother Marie is in India, running aid projects for tsunami relief, unaware her assistant Linda resents her and is resigning. Sammy is seeking his fortune in Shanghai; his sister meanwhile suffers for the Chinese preference for sons. Alex's old friend reappears with news for Julian. If you've enjoyed multiple viewpoint films like Babel or Magnolia, the criss-crossing characters and overlapping stories shouldn't trouble you, though being the third part in Border Crossings' Orientations series, some details are glossed over or expected to be taken for granted.

Scenes are performed in English, Swedish, Mandarin and Kannada with no difficulty for the audience to follow - this is an impressive achievement as is the seamless mix of video, music and live acting. Though it could easily lapse into self-congratulatory "isn't multiculturalism GREAT?" cliches about how we're all different but also all the same, the characters and their stories are not treated with such simplicity. The relationships are sophisticated and complex, the characters are deep and multi-faceted, not everybody learns something in a neat, conclusive ending. Such a broad range of culture, experience and language should be confusing, to the audience and between the characters but in some exquisite scenes, we are shown how we can transcend language and cultural difference to connect with one another. The world can be a small, sometimes painful, often puzzling but ultimately uplifting place and Re-Orientations confirms that.

Re-Orientations at Soho Theatre, until 25 September. For more information and to book, go to the Soho Theatre website.