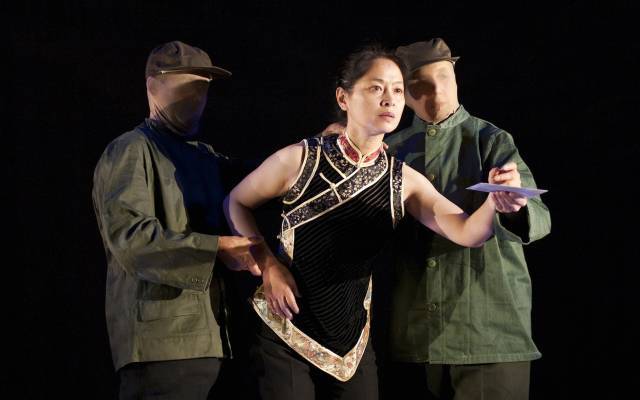 Opening this week at Soho Theatre is Re-Orientations, a multi-cultural, multi-media live performance by Border Crossings (the company that brought the Origins festival to London last year) and has been developed over two years, bringing together performers from China, France, India and Sweden. With no common language between them, the cast have devised a sprawling story that connects a series of seemingly unconnected people, across several continents, in several languages. We asked director Michael Walling how on earth he was able to manage all this, and how such an international team is finding London.

How do you rehearse without a common language?

It isn't easy, of course. I've been very lucky to have an Associate Director who is bilingual in English and Chinese - Huang Qiling - and her presence makes life a lot simpler. But translation is never quite perfect as a means of communication, and it certainly doesn't allow the play to emerge from our improvisations. Part of what we've done has been to make a virtue of our linguistic diversity - so that the characters in the play are all trying to understand each other, just as we are!

Have you learned any phrases or words in Mandarin, Swedish or Kannada that you wish we could use in English?

What's been most exciting for me has not been the specific words of the different languages, so much as the music they create as they interweave. I think we very often rely on the literal meaning of words too much, and forget the emotional power of the sound. I've enjoyed not understanding everything precisely!

Border Crossings has performed in many different places around the world; how do audiences differ from place to place?

It amazes me, every time we perform in a new country, how different the play becomes. It makes me realise that the audience really does contribute very actively to the performance. The laughter always comes in different places. It's going to be fascinating to see where the Chinese audience laughs, in contrast to the English one. Never mind the Swedes....

Do you have any plans to stage the three Orientations plays as a trilogy?

Yes please! We'd love to do this - but it's a complex business. We'd need to have 12 actors for at least six weeks of rehearsal, and the longest technical rehearsal ever.... But, with the right support, it would be an amazing thing to do. We're hoping to start discussions with potential partners soon, so watch this space!

What next for Border Crossings?

We're hoping to run another Origins Festival (of First Nations Arts) next year after the success of Origins in 2009, and to develop a new devised piece. We're in discussion with partners in India, Brazil, Japan, Palestine so there are many irons in the fire, and it's really a question of which one comes out first.

What have you and the cast enjoyed most about London?

I live here... so this is more a cast question. I think they've really enjoyed the sense of being in the thick of such an amazing cultural space. They've been to see lots of theatre, and they went to the Notting Hill Carnival. They've enjoyed the location of Soho Theatre - right next to Chinatown and in the heart of the gay community - a really interesting mix of our perfect audiences.

How would you and the cast improve London?

The tube strike didn't exactly help us for our first performances. And neither did the rain.

What would be an ideal venue or location to perform in that you haven't performed in already?

It depends on the show. I love the Barbican - but equally I'd like to do something in the Old Vic vaults - I saw a piece there during LIFT and loved the atmosphere.

Re-Orientations at Soho Theatre, until 25 September. For more information and to book, go to the Soho Theatre website.