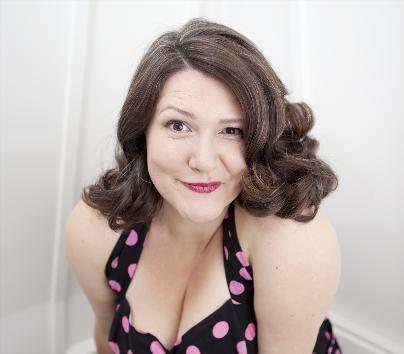 Kate Dimbleby: she doesn't do things by halves. This, her third of a thirty-five show residency is an intimate affair. The New End Theatre, an ex-morgue given new life, is designed so that the small audience can all see and hear what’s happening while Ms Dimbleby has a voice which can shake the rafters. Finchley-born Cirque de Soleil director Cal McCrystal has worked his magic and there are many inventive touches throughout the show, for example, the bottle of pills used as makeshift maracas during show opener Mother’s Little Helper.

There is much to admire here about her choice of songs including numbers from more recent stars like Dolly Parton and Carole King as well as trailblazers like Pearl Bailey. She has a great pair of lungs on her so when she stomps and snarls through Bessie Smith’s In The House Blues and sings that she “(feels) like hollerin' murder”, our natural instinct is to sit up and keep an eye out for sharp implements.

All the songs are introduced with a spot of history, relating to the song, the singer or Kate herself which makes for some interesting between-song banter. The show may be titled I Am A Woman but the woman in question is no diva: she takes time to introduce the band until, by the end of the show, we know their names and a little about their pasts. We’re not sure if blues musicians should be smiling during songs of homicide and heartbreak but there’s no mistaking the band’s shared bonhomie.

This is unashamedly a show by a woman about women and targeted at women (Kate admits as much) but there’s plenty here for every fan of jazz and blues, regardless of gender. She's playing until October 3 so catch her while you can. Tickets are available online here or from the box office (details here).

Our recent interview with Kate.

Earlier this year, we hearted An Israeli Love Story at the New End Theatre.

PS Sharp-eyed readers may have spotted she is indeed the daughter of famed food writer Josceline Dimbleby.