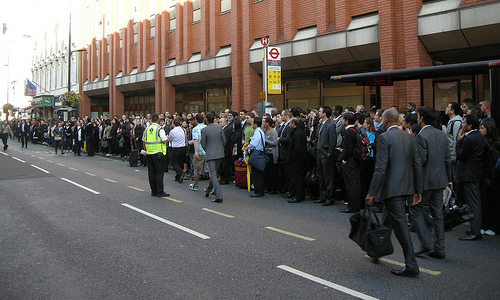 Paddington this morning, by Martin Deutsch

The 24-hour Tube strike, which began yesterday, has been hailed as a huge success by union leaders, after the majority of the network was disrupted. Skeleton services on the Underground and long lines at bus stops greeted commuters this morning, despite the efforts of TfL to minimise disruption. As of 10am this morning, only the Northern line is reporting a good service, with all other lines suspended, part-suspended, or suffering delays.

The strike, called by the RMT union and the TSSA in defiance of TfL plans to reduce ticket opening hours (a matter explicated by Diamond Geezer), is the first of several planned for the remainder of 2010, and will cost London in the region of £50m per day. The BBC has a rolling live broadcast that's keeping up with the latest on the strike as the day unfolds. It's due to finish at 5pm today, but there are likely to be severe problems throughout into the late evening.

How was the strike for you? Drop your morning commute tales in the comments below.