How To Get Around During Tuesday's Tube Strike 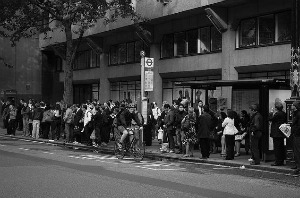 Image by becksldrt from the Londonist Flickr pool
Last night came the annoying but somewhat inevitable news that talks between London Underground and the RMT / TSSA have broken down, so now TfL have announced how they hope to mitigate the effects of next week's strike.

RMT maintenance workers plan to walk out at 5pm on Monday; previous maintenance worker strikes haven't caused much disruption, but this time we have the addition of RMT and TSSA drivers, station and signalling staff walking out from 9pm as well. Both strikes are scheduled to last for 24 hours.

TfL hopes to operate some services with the 60% of drivers who belong to Aslef, but how many stations will be open for those trains to stop at won't be known until Tuesday. If you don't fancy taking your chances with the tube, TfL have unveiled other plans:

Extra capacity is being added to river services between Tower, Westminster and London Eye piers

Workers at Alstom-Metro depots for the Northern and Jubilee lines are also striking for 24 hours from 7pm on Sunday. And an aside in the unions' statement might have long-term implications: members start an indefinite overtime ban from 00.01 on Monday, which could lead to random staffing problems across the network. We have been warned.