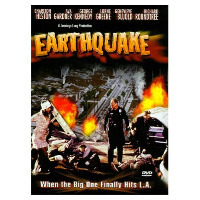 To most Londoners, the threat of an earthquake probably ranks about as likely as a giant mothra attack. But, says Roger Musson of the British Geological Survey, we're long overdue a potentially lethal wobble.

Speaking at the British Science Festival at Aston University, Dr Musson explained that a minor fault under the Straits of Dover had previously caused damaging quakes in 1382 and 1580. According to an unreferenced note on Wikipedia, two children were killed in the latter, which has been estimated at magnitude 5.5.

"While the next earthquake would not be a disaster on an international scale, it will come as an unpleasant shock for a country that tends to think itself immune from earthquakes," says Musson. Most modern buildings would be unaffected. But there could be severe damage to London's huge stock of Victorian and Georgian buildings, many of which are propped and patched into stability. You've been warned.