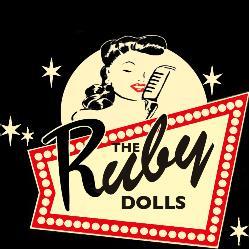 There’s a serendipity to The Ruby Dolls plying their German cabaret at the Jermyn Street Theatre but they don’t dwell on it too much and why should they? There’s far more to this show than a handy homonym. On the face it, we have four cute ladies who sing songs of yesteryear, wear period outfits and smile like their lives depended on it. So far, so Pipettes.

The show’s title, Ein Abend Mit Ruby, gives away the first clue that this isn’t going to be your standard cabaret. The Dolls are quite happy to roll out songs in English, German and French and, even if your foreign language skills extend as far as wild gesticulation and speaking English loudly, you’ll find yourself gleefully singing along to words you probably never knew before. Why can’t all language lessons be like this?

What makes the Dolls’ show stand out, though, is the effort they make to wrench us out of a London theatre basement in 2010 and drop us into Berlin from the 1930s through to the 1990s in a way German poet and playwright Berthold Brecht would have approved of. He believed that theatre should have a social function and the Dolls use poetry, diary extracts and songs by or about women to tell tales of war, loss and prejudice.

This isn’t to say that the show is a musical history lesson. No: there’s politics too. With the aid of two stuffed cows, we’re treated to witty explanations of fascism, communism and capitalism (“Capitalism is what happens when you leave people alone.”). Brecht himself gets cheeky mentions throughout the show thanks to a placard with his name on which is waved as his name is sung alongside songs by Kurt Weill and Noel Coward.

The use of foreign languages might not work outside cosmopolitan London but we admired this show for trying to be different and educational. If you're after entertainment with beats, beauty and Brecht, then it's Ruby Dolls über alles.

The Ruby Dolls will playing at the Jermyn Street Theatre this Sunday (September 26). In order to book tickets, see the theatre website here.