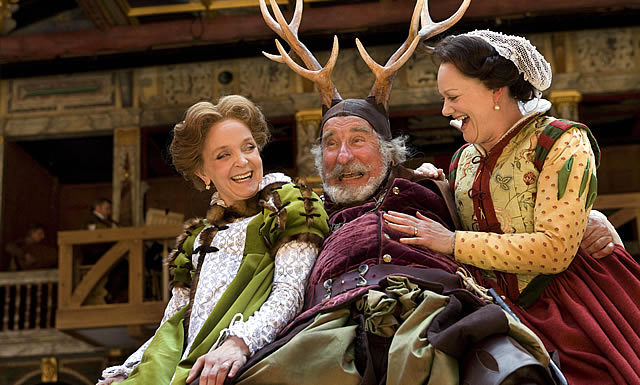 The Globe Theatre's hit 2008 production of The Merry Wives of Windsor is back. And you can catch it at the reconstructed Globe until 2 October, before the whole merry production heads off on tour to more exotic climes like California and New York later in the year.

Much has already been written Christopher Luscombe's production, which turns Shakespeare into TV sitcom.

We missed it first time round, but are pleased to report that, yes, this Merry Wives is a very funny show, in that classically English TV way.

Excellent programme notes point out how much of Fawlty Towers comes from Merry Wives. We also spotted The Good Life's Surbiton in Shakepeare's suburban Windsor (complete with watering cans); 'Allo 'Allo in the word-warping of the French Dr Caius and Gareth Armstrong's Welsh Parson Sir Hugh; Blackadder's Queenie in Mistress Ford; and Dad's Army or One Foot in the Grave in the doddering old dudes.

The moment jealous husband Frank Ford (Andrew Havill) physically attacks the empty laundry basket is pure John Cleese. Seeing Christopher Benjamin's Falstaff totter arthritically down onto one knee to woo Mistress Page is somehow hilarious. And hearing the old fool report his various beatings and Thames dunkings did remind us of Victor Meldrew, albeit a much merrier one.

The excellent music by Nigel Hess, played on Tudor instruments (look out for the cittern, shawm and sackbut - no, we're not sure either) again nods to this TV tradition. Triangles ding as characters have ideas, twinkly little interludes denote changes of scene and funny episodes seem to end with that classic comic wah-wah-waah.

The eponymous wives shine too. Serena Evans and Sarah Woodward seem to be thoroughly enjoying themselves portraying these delightfully written rareties: Shakespearean women with equal status (for lines, laughs and liberty to plot revenge) as their husbands.

This Merry Wives is not subtle, but it is, in the manner of certain old-school TV comedy slightly nostalgic, classically crafted, definitely silly and extremely gentle.

And we think that if the powers-that-be are looking for something "typically English" to add to that old 2012 Cultural Olympiad, surely this show, Shakespeare's only England-set comedy is ripe for consideration. A third revival? Why not? It just stretches the TV sitcom analogy one step further. Then someone could film it and show endless repeats on Dave, too. The bit where Mistress Quickly says "erection" instead of "direction" will probably still make some of you snigger no matter how many times you've seen it.

The Merry Wives of Windsor plays at Shakespeare's Globe until 2 October. Visit www.shakespeares-globe.org for more information, and to book tickets.