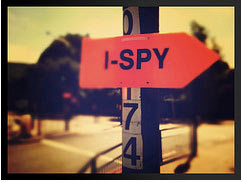 By James Green via the Londonist Flickrpool
Keeping your curtains closed and paying with cash are two of the latest things highlighted as suspicious behaviour in yet another Association of Chief Police Officers (ACPO) 'grass up thy neighbour' initiative in the name of anti-terrorism. The advert, broadcast on TalkSport, has been banned by the Advertising Standards Agency after it urged people to report so-called suspicious behaviour to an anti-terror hotline.

Encouraging the public to spy on each other isn't exactly new but does seem to rear its slightly Orwellian-looking head every now and again - tube passengers and teachers have both been encouraged to cast the beady eye of suspicion on their fellow travellers and young charges in an attempt to sniff out terrorists and London's suspicious photographers were until recently fair game for security guards.

It's one thing to encourage people to be vigilant but the level of snooping frequently descends to the ridiculous and promotes a climate of fear as well as providing opportunity for harassment over behaviour which is not illegal and not even particularly unusual. The Met countered the ban by saying somewhat defensively that 'the ad addressed the issue that terrorists lived in normal communities and what sometimes appeared to be insignificant behaviour could potentially be linked to terrorist activities' though it seems they have overlooked the fact that using cash and keeping to oneself are also common in normal communities. So if you live alone, make sure you rack up your credit card debt, take your curtains down and put a sign in your window saying 'Im a misanthrope, not a terrorist'.

You can hear the offending advert on the Met's website.