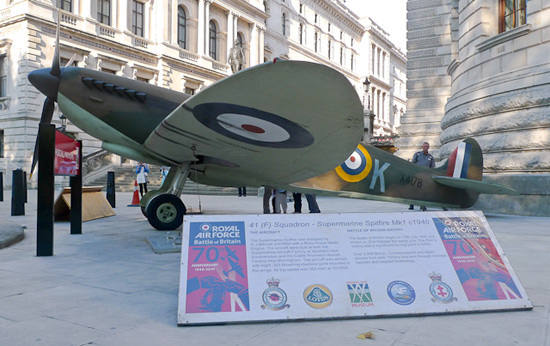 A full-size replica of a Supermarine Spitfire Mk 1 has been parked outside the Churchill War Rooms, where it will remain until the end of the month.

The replica is part of the museum's drive to commemorate the 70th anniversary of Winston Churchill's famous radio address (best known for its refrain, "Never in the field of human conflict was so much owed by so many to so few"). At 3.42pm on Friday, August 20th, there will be a reading of the speech outside the War Rooms, and a Spitfire and Hurricane will fly over Whitehall at 4.05pm.

Churchill spent much of his time during the war in Whitehall, but in the event of an attack directly on the seat of government, the Prime Minister had a secret bunker built in Neasden to accommodate what remained of his Cabinet. We had a nose around last year, and you can visit it during this year's Open House.