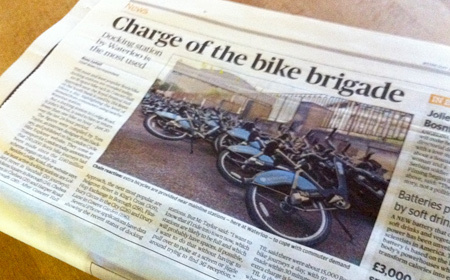 Things must be getting tight at the Evening Standard: yesterday they pinched a photograph taken by this writer that had first been published on Londonist, and put it on their website and in the print edition, without credit or permission. The picture, originally used for a post on Monday, accompanied a story about London's most used Cycle Hire docking station.

Now, Londonist is obviously a website that feeds on the news-gathering operation of such publications as the Standard, and we well understand that the modern media environment is one of shared and pooled resources. But we always credit our sources and link back to where stories come from. The Standard's picture editors (or whomever found the photograph) will have taken it directly from our site, and hence know the photograph's origin. A quick email or phone call our way would've been, to say the very least, welcome.

The picture has since been credited on the website (though not in the print version), but the diligent webmasters declined to approve a comment we left which drew attention to the original Londonist post.