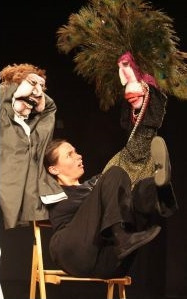 Greek myths told through the medium of puppetry? Sounds rubbish, doesn't it? But Occasionally Ovid doesn't use adorable muppets. These are grotesques (with a hint of Gary Larson) that tell horrible stories of rape and murder under the one-woman control of Helen Ainsworth.

First we have the tale of Erisychthon, who chopped down a sacred forest and was cursed by Ceres with a never-sated hunger. Phaethon is the whiny son of the Sun, who nearly destroys the Earth to prove who sired him, and the story of Tereus is one of bloodthirsty revenge. The stories have been modernised and energised, and there are some ingenious uses of the puppets - for one, demonstrating the consequences of Erisychthon eating everything in sight (what goes in one end must go out the other) - as well as enough self-aware references to puncture any hint of pomposity.

We were so engrossed by the stories and characters we often forgot there was a person manipulating the sponge faces (Ainsworth usually disappears under a cloth to create the puppet's 'body'), and we genuinely recoiled at some of the most appalling bits. The show doesn't shy away from the raw violence of Greek mythology; it's not one to take the kids to. If there's any bum note, it's that between each story the stage has to be cleared and re-set which breaks the spell a little. This is a minor quibble, however, and is offset by how much you'll marvel at the intricacy of the puppets themselves and the skill with which they're brought to life.

Occasionally Ovid is on at the Etcetera Theatre, above the Oxford Arms, 265 Camden High Street, at 3pm every day until 14th August. The Camden Fringe runs until 29th August, all tickets are £7.50. Read the rest of our Camden Fringe reviews.