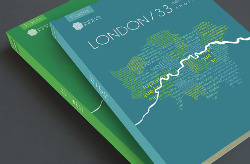 Smashing idea, this: a double compendium of 33 short stories, each based on a London Borough. The collection is split across two volumes, which ignore the Thames as usual-divider and instead split the capital into East and West moieties. The result is a hotchpotch of enormously variable but highly enjoyable vignettes of London life.

The whole of London is here, from tales of struggling immigrants to champagne-quaffing Kensingtonians. Many are deliciously contemporary: an urban treasure hunt, a local campaign against Olympic heavy-handedness, the trouble with foxes... Some are simply beautiful, such as Debi Alper's 'How Lucky You Are'. Others, such as Jonathan Green's entry for Richmond, which can only be described as a back-to-front instant-message ghost story, are impressively inventive.

Pedantic readers shouldn't be put off by the book's title, which invents an additional borough in order to include a story about the Square Mile. Less easy to forgive is the lack of copyediting throughout. One or two typos are to be expected in any book, but the number of spelling mistakes on show here is simply distracting (although sometimes amusing - author Tim Scott apparently 'stared' in an ITV comedy series...well, wouldn't you?).

If you can see beyond these minor production problems, though, this twin pack of London shorts is a fine collection of fiction from a talented ensemble of authors.

33 East / West is available now from Glasshouse Books. Each of the two volumes (East, West) is available from Amazon for £7. Follow the publishers on Facebook.