A Ruislip By Any Other Name...

By Jonn Last edited 146 months ago
Jonn A Ruislip By Any Other Name... 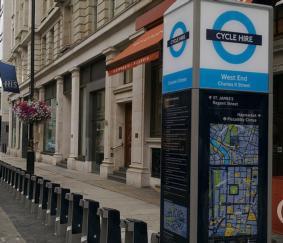 Image courtesy of prkn under a creative commons licence
One-little commented side-effect of London's cycle hire scheme has been the insight it's given us into what TfL thinks different bits of London are actually called.

Going by the names on the cycle docking stations, the transport supremos are under the impression that the city has districts called Monument, Temple and Guildhall. There's no Blackfriars, however, no St Pancras, and Vauxhall has swallowed Lambeth whole. Liverpool Street is an area, despite being a street; Old Street, though, isn't, and is instead covered by the archaic St Luke’s.

Rather than choose whether the name Marylebone should apply to the historic parish north or Oxford Street, or the smaller area immediately around the station, someone up there has decided it includes both. Southwark, though, is deemed to cover neither its historic centre, nor the entire borough, but a few streets round the Southwark tube station (which was anyway blatantly only called that because they couldn't think of another name). Clerkenwell covers a vast, L-shaped area, with a bite taken out of it belonging to Finsbury. Borough seems to consist of some of the less salubrious streets south and east of its more affluent neighbour, The Borough.

These choices, we'd argue, matter. Being plastered all over highly visible public transport assets, these names are likely to stick: as Kings Cross replaced Battlebridge, and New Cross Gate elbowed out Hatcham, their visibility is likely to drive usage and convention. How long can it be before people who live a mile from the green and 20 seconds from La Scala will be saying they live in Clerkenwell, because the sign tells them they do?

So - are there any other cartographical oddities out there? Any place names that TfL seems to have just made up? What have they got wrong?