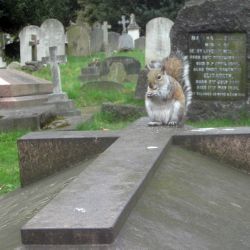 Squirrel on a grave by Matt From London, with permission
Squirrels: could you eat a whole one? If yes, proceed to North London where you can buy squirrel meat for your dinner. Claimed to be low in fat, high in protein and possibly with a delicious nutty flavour, it can be bought from a Budgens in Crouch End. Animal welfare group Viva is inevitably against the sale of squirrel meat; founder and director Juliet Gellatley describes it as profiting from “wildlife massacre”

Andrew Thornton, owner of the controversial Budgens, is undeterred, pointing out that selling 10 to 15 squirrels a week is not a massacre. He goes on to suggest that squirrel meat is more sustainable than beef, which requires a tonne of grain to produce a tonne of meat. He is also suggesting that since the furry little beasties are proving a problem - too many of them, they’ve chased off red squirrels, they steal from bird feeders and are nuisances in homes - we may as well eat them instead of culling and destroying them. There’s also profit to be made, which he does not mention in the same quote.

It’s important to add here that the squirrels for eating are not the feisty attention seekers posing for photos and snacks in St James Park or streaking across four lanes of traffic in central London. Thornton purchases squirrel meat from a game supplier in Suffolk. His branch of Budgens is the only one in London to stock squirrel meat - don’t all rush at once to either purchase or protest: it’s been out of stock for weeks because the suppliers are focusing on stocking other game products. Watch this space for the next round of “Could you eat...?” Our bets are on pelicans or bats to be next.