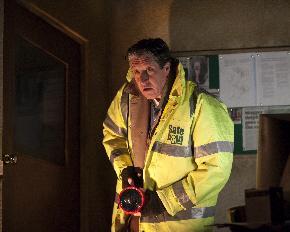 (c) Helen Maybanks
London is not short of ghosts. It is home to a world-famous poltergeist, haunted tube stations and countless apparitions from the Roman age onwards.

It makes sense then that, following its debut in Liverpool, Ghost Stories has transferred to London and the Duke of York via a successful run at the Lyric Hammersmith. The play is a joint project between Andy Nyman, famous for being the co-creator of Derren Brown’s TV and stage shows, and Jeremy Dyson, one of the main writers behind The League of Gentlemen.

There is very little that can be said about the plot or the characters without giving away the surprises. Not all these surprises were shocking; indeed, we were pleasantly perplexed by how much of the show was leavened with laughter, as opposed to the horrorfest that the advertising promises. The mood of the set pieces is convincingly set by the effective use of lighting, a frequently changing set design and clever stage props. Based on the reactions of the audience, some of these pieces were more visually effective for those in the stalls than those seated in the Royal Circle (where we were) or above. Rest assured, though, that sight is not the only sense assailed as good use is made of sound, especially in the early part of the show.

The play’s dramatic roots pay homage to the likes of Ghostwatch and the Blair Witch Project with more than a nod to modern Japanese horror flicks like The Grudge or The Ring. With the target audience probably more au fait with Fisher Price than Vincent Price (to stretch a point), the show’s creators have gone with a contemporary script which only slows down to allow nerve-gnawing tension to fill the theatre.

Ghost Stories’ success is very much depends on the person. Going by the number and volume of the shrieks (mostly female though, it has to be said, not all), there was much frightening going on throughout the show’s single act. Some theatregoers (of both sexes), though, were left completely unmoved.

Nyman’s hand is evident in the high quality of stagecraft with inventive props and set design usually associated with larger productions. As for Dyson, his atmospheric script shines brightest in the show’s darkest moments; you could say that that this play is less Royston Vasey and more ghosts gone crazy.

Ghost Stories runs until 7 November 2010 and tickets can be bought here.