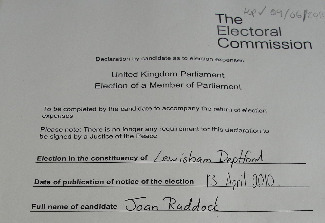 Part of Joan Ruddock's expenses return. You can view the whole return on Flickr.
A Londonist investigation has revealed that Lewisham Deptford MP Joan Ruddock may have taken advantage of a loophole in Electoral Commission guidance, which allows an election candidate to avoid submitting receipts accounting for expenditure.

Why do we need to see boring things like receipts, you ask? Well it's so we can verify what the campaigns say they spent, to ensure no candidate received an unfair advantage by spending more than the legal limits. Without receipts, we have no evidence beyond the campaign's assurance that they stuck to the spending limit, or that they've accurately accounted for costs that were shared across multiple campaigns.

Former energy minister Ruddock's 'short' campaign election expenses return has no invoices or receipts attached. The reason? All spending is, perfectly legally, attributed to "notional expenditure". This is used to account for "benefits in kind" received by the campaign - like a supporter allowing their printer to be used - or for any items paid for on behalf of the candidate. Under Electoral Commission guidance, no invoices need to be submitted for notional expenditure. In Ms Ruddock's case, the Lewisham Deptford Labour Party has paid for and supplied everything bought by the campaign - amounting to £8,100 - and this has been counted as a donation, as required under the rules of notional expenditure.

But listing the entire cost of a campaign as notional expenditure is pretty unusual. When we looked at the expenses return of Liberal Democrat Tamora Langley, Ms Ruddock's closest rival in Lewisham Deptford, we saw that many items bought by her campaign had been paid for by the local Lib Dem party - and receipts provided. Some of these were 'donated' to the campaign, some of them the campaign repaid and none were designated notional expenditure. (You can view the full returns for Joan Ruddock and Tamora Langley on Flickr.) In the neighbouring constituency of Lewisham East, Labour MP Heidi Alexander was also the recipient of items paid for by the local Labour party - receipts for which have been provided. £185.20 of her campaign is designated notional expenditure. (Our thanks to Tom Royal for looking into Lewisham East; you can also view the returns of the Conservative candidate, Jonathan Clamp.)

Ms Ruddock's election agent has confirmed to us that the campaign was run in this way to ease bureaucracy; one look at the other returns and you'll see scribbles across invoices as parties try to work out how much to apportion to each campaign.

However: we're not sure that, in the current climate of concern over political expenses and transparency, this - while legal and adhering to Electoral Commission guidelines - can justify financing an entire campaign using a method that does not require receipts to be provided. We think it's noteworthy that all other candidates we've looked at - and even Zac Goldsmith - held the public in enough respect to provide documentation to back up what they claim.

We will be asking the Electoral Commission to look into this area of its guidance, and to possibly revise it in order to produce greater transparency in public life.

See how Londonist covered the election