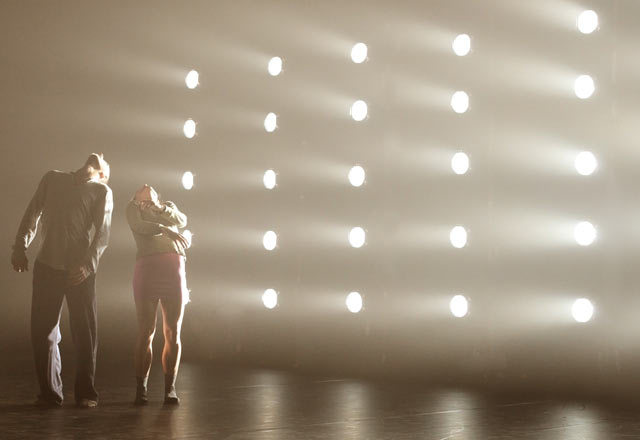 After his highly-acclaimed The Art of Not Looking Back in 2009, Israeli-born choreographer Hofesh Shechter has hotfooted it back to London with his new show, Political Mother.

While Shechter's previous show was an all-female introspective creation, Mother uses a mixed complement of dancers to paint a global message about oppression. The design of the stage allows Shechter to use two axes to grind out his missive: four rock guitarists, four drummers, a folk band and a singer are arranged vertically along the back wall representing the authoritarian state while, on the floor, the dancers portray the general folk, soldiers and prisoners of this beset land.

The show begins in bizarre fashion with a single soldier silently kneeling, producing a sword with which he commits ritual suicide while Verdi plays in the background. He writhes on the ground for a long minute before becoming still. This scene is bizarre because nothing that follows comes close to this prologue in terms of emotional clarity and power.

The dancers and set designers do themselves justice, effectively evoking scenes of work, play, riots, torture and death as well as traditional Israeli dances. At other points, Shechter's intent is unclear and it is left to the audience to decide what he means, especially during a dull ten-minute patch in the middle. The final scene is an other-worldly all-out hoedown with the dancers joyfully celebrating to the sound of Joni Mitchell, maybe in a dictatorless utopia, maybe in the afterlife.

The music itself deserves a special mention. Co-scored by Shechter and apparently influenced by 90s hair metal, the guitarists and drummers produce a Great Wall of sound which could probably be heard by Phil Spector in his Californian prison cell. Style triumphs over substance as the music becomes an aural assault, a blunt instrument used to beat into the audience just how big and bad the system depicted here is. The singer does his level best to imitate a certain monorchist Austrian demagogue, ranting and raving in a language not discernably English, German or Hebrew.

When not testing the limits of the Sadler's Wells amplifiers - seems they really do go up to 11 - the music is, bookend scenes apart, Bach-alike violin, eerie silence or a gentle humming (though that could have been the A/C on this balmy evening).

The show closes with a slowly-revealed message: "where there is pressure there is folkdance" providing conclusive evidence that, from Verdi to Joni, the hari-kiri to the hearty party, the show is a pretentious mishmash which has little new or substantial to shout about but shout loudly it does for over an hour. Bring earplugs.