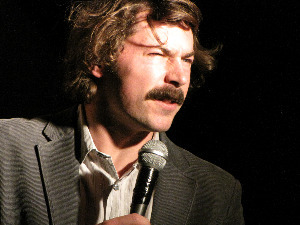 Mike Wozniak / image by Amused Moose Comedy Quizzical
If we'd stopped and thought about it, we would have prepared. But we didn't. We wandered down to enjoy a full day of comedy at Jokes Newington without even having done the basics: proper breakfast, toilet break, lots of coffee. It's not surprising that we staggered off seven hours later, funnybones exhausted, with more acts still to come. How do people ever manage Edinburgh?

And it's Edinburgh we were being offered a sneak look at. Twenty comedians doing previews of their Fringe shows spread across Stoke Newington's Pangea Project and Bird Cage, which means lots of looking at notes, stories told in the wrong order when that really crucial set-up has been forgotten, and material that may never see the light of day again. As such it's not really fair to review the shows themselves, but we saw enough to tantalise and recommend.

Robin Ince kicked everything off at midday. His shows are never fully finished until mid-way through the Edinburgh run (if ever), but part of the joy of watching him is discovering where his hungry (and angry) brain will take flight to next. The main theme seems to be about philosophy, but you should probably just go with whatever he starts talking about because it will always be funny. Two Episodes of Mash is deadpan sketches from stand-ups Diane Morgan and Joe Wilkinson, throwing out the traditional punchline in favour of laid-back surrealism with a dash of silliness. It works. We then abandoned the crowds waiting for Stewart Lee in the dark and hot Pangea Project to try the light and airy Bird Cage, and after being charmed by Tom Craine we're very glad we did.

Mike Wozniak, sporting the most splendid moustache we've ever seen not on an early twentieth century absolute monarch, hilariously overturned the rule about how interested you are in other people's children / conception attempts being inversely proportional to how much they talk about them. Bridget Christie, the only lone female comedian on the bill, played to a standing-room-only crowd about cats, bad motherhood and Sainsburys, and Tiernan Douieb lamented his nice nature while being possibly the nicest comedian we saw all day. Then we could take no more - not even to wait for Andrew O'Neill and Tony Law, which we'll doubtless regret. Next year, we'll be in training.