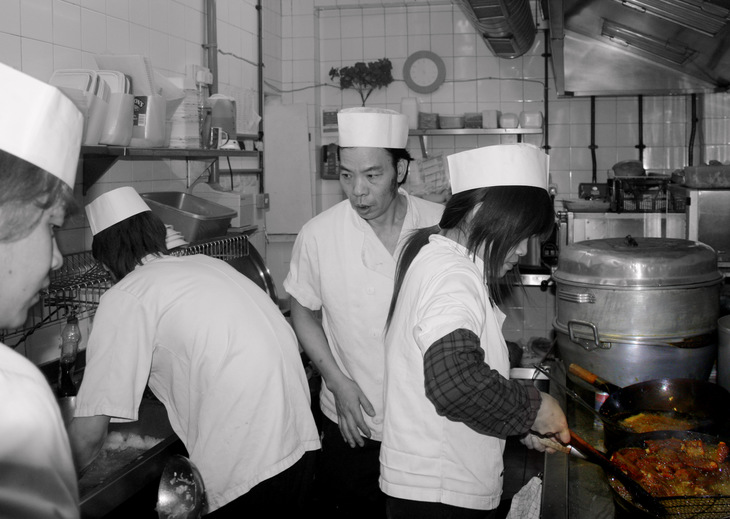 Wai Lan is Head Chef at Drunken Monkey in Shoreditch. Although the restaurant is known for its cocktails, Wai Lan has introduced a traditional Chinese oven and revolutionised the dim sum menu. Born in Liverpool, Wai Lan moved back to Hong Kong with his parents when he was four and lived there for ten years before returning to the UK. He has been cooking at Drunken Monkey for the past six years, and only took time off last year for five months to revisit China and reinvigorate his cooking.

What was your first job in a professional kitchen? How did it lead to where you are today?

My first job was when I was 12, helping my uncle in his restaurant in Mong Gok, Hong Kong. The chefs would carve flowers, birds, butterflies and pagodas out of turnips and carrots when they were not busy, they would then be used to garnish the dishes. I would sit there and watch, so my Uncle bought me a small carving tool kit and the chefs taught me how to make different dishes.

I remember being excited watching the chefs during service, especially when food in the ‘char wok’ (the main wok cooker) was cooked really quickly; there were always lots of banging noises and flames shooting up around the wok. You would hear the metal ladles scraping along the wok, and suddenly you would see all these amazing dishes ending up on the plates. From then on, I always helped my uncle when I wasn’t at school. When we moved back to London, I went to catering school, and I worked in restaurants both here and back in Hong Kong. I still love the noises and the smells during service.

Food of course! Working in different countries is always exciting because of the different ingredients you have at hand. But the buzz of service, noise, the heat, smells and pressure of being in the kitchen is like a drug to me.

and what do you dislike?

You recently took a culinary trip back to China. Where did you go, what did you learn there, and how has it influenced your cooking?

I first went south to spend time in Hong Kong of course and to see my uncle and aunt who have retired and moved back to their old village in Guangdong (Canton). My cousin still runs the restaurant in Hong Kong, so a lot of the old faces are still there. My auntie and uncle are my biggest food critics - they constantly watch what I am doing.

From there I went to Fujian which is known for seafood, then spent some time in Hunan, Shandong and then back to Guangdong. I always learn something new when I travel; I think when you stop learning you must not be breathing! I don’t think the trip influenced me as much as revitalized me: food is such an important part of any culture, so being back in China was like reuniting food and culture back together for me.

What would you say is the most important philosophy of Chinese cooking?

Like most things, I think the most important philosophy is pretty simple and is down to Ying and Yang. This is not about opposing forces, but more about creating a balance in texture, taste and colour.

What experience do you hope diners will have through your food at Drunken Monkey?

I want everyone to have a good experience, and to know that Chinese cuisine is not all about sweet and sour and thick sauces. I also want to give people the proper Chinatown experience; our roast duck and barbecue char siu are just as good as anything you will find in the West End.

As well as a restaurant, Drunken Monkey has a significant emphasis on the cocktail menu. Does this cocktail bar atmosphere change the way you cook?

The biggest change is more down to the way we have broken tradition. Dim sum was traditionally only served in tea houses until 2.30 in the afternoon. Because of the nature of dim sum (which means "tiny little treats") we knew it was the perfect accompaniment to go with cocktails, the same way the Spanish nibble on tapas. This is why we broke the mould and decided to sell dim sum all day. We were the first restaurant to do so; it’s been funny seeing chains like Ping Pong and Yum Yum open up since. I like to think we paved the way for them.

What is your most precious piece of equipment you use whilst cooking and why?

My wok of course, and after that my cleaver. A good sharp cleaver can just about perform any task needed, it has the weight to crack lobster claws, a good slicing length and enough precision to open oyster shells too.

Where would you recommend Londonist readers go in London, if they want to purchase good quality ingredients for cooking Chinese dishes?

We are spoilt in London. Chinatown is the obvious answer but outside of the West End there are now so many big Chinese supermarkets. Wing Yip in Croydon is a great example; all the local restaurateurs shop there because you can buy live seafood, it has a great Tea House which is always full, there is parking, no congestion charge and it even has a small HK style shopping mall upstairs!