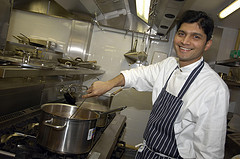 Did our recent Chefspective interview with Alfred Prasad, Executive Chef of Tamarind, leave you hankering for quality Indian cuisine but fretful about splashing out at his Michelin starred Mayfair restaurant? A more affordable option might be Tamarind's sister restaurant, Imli. Located in Soho, Imli offers “tapas style” Indian dishes at a fraction of the price of Tamarind. Trained at Tamarind, Imli's Executive Chef Samir Sadekar gives us the low down about what to expect at his Wardour Street restaurant.

You were trained at Imli's sister restaurant, Tamarind. What are the differences and similarities between the two restaurants?

Differences: Tamarind is very meticulous in plating dishes with lots of emphasis on garnishes, oils, sauces and presentation, while Imli restaurant is more basic, with the focus being on producing good quality food quickly. Tamarind uses expensive raw materials such as lobster, monkfish, king prawns etc while Imli uses regular raw materials because of the different concept and the average guest spend at this kind of restaurant which is more in line with STRADA, Gourmet Burger, PREZZO, and many other quick service restaurants.

Similarities: Both have very strict control on quality, after all the chefs at Imli have been trained at Five star Hotels back in India and in UK at Tamarind. Our suppliers are the same so quality is assured.

How did you get into cooking as a career? What's your background that led to your being a chef?

By accident! I was at a stage where no job seemed interesting enough when I happened to meet some hospitality college students. As I spent time with them I realised that this was something that I would love to do and so I took the plunge and never looked back.

Mom and Dad both worked and mom was always hard pressed for time so I used to help her in the kitchen sometime. I was her commis chef and would do all the prep work for her including cleaning and de-boning fish (we would eat fish 6 days a week) Cooking slowly became second nature without me ever realising that I could make a career out of it.

Imli serves small 'tapas' style sharing dishes. Is there a tradition of small sharing dishes in India? How authentic are the recipes that you use?

Sharing dishes has always been a tradition in India because we believe when we share food, it brings you closer to each other. During meal time all the family would sit together and talk about how thier day has been or any other family matter (probably the Spanish took the concept from us , gave it a name and then claimed its origin) There was hardly any eating out at the beginning, all food would be cooked at home to be shared . As restaurants opened and people started going out, the orders would be for the table and not for individuals. Even now people still order food to share.

Authenticity is a very big word and people have different interpretations. Most of the Indian recipes are traditional but over the years things have developed and people have become more aware of good healthy eating. The recipes are authentic, but we are incorporating more local produce and we do our best to tone down the richness of the dishes without compromising on quality or flavour of our food at Imli.

What are the most popular items on your menu?

Imli menus cater for every one, people with an adventurous palate as well as traditional. Within the menu we have the light and refreshing tapas and the grilled tapas which is the most popular. In that the papdi chat, samosa chat and the masala grilled chicken and honey grilled duck are most popular. At the same time the old traditional comfort food such as CTM and Dal Makhani does equally well.

Where do you like to go when dining out in London? Where do you shop for your home kitchen?

I usually dine out during the weekends and as I live in Kent I prefer going to local restaurants which have been recommended by friends though I tend to go for Chinese food.

Home kitchen shopping is done in supermarkets and for Indian goods we go to Green Street which is just like a mini India.

What advice would you give to Londoners interested in cooking Indian cuisine at home?

Come to me and I will give you few tips!

Do not get intimidated by the spices, every cuisine is a combination of hot, sweet, sour, salt and bitter. The same principle is applied, only the ingredients are different. Try experimenting on common vegetables like potato or spinach by adding one Indian ingredient. Make tomato soup and add chopped coriander to it or add some cumin to hot oil and add to the soup. As you get more and more confident you can buy a book and then try to follow the recipe.