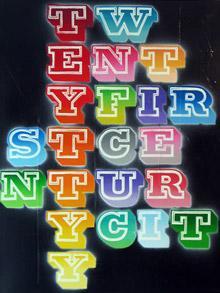 For all the talk of BP, Lockerbie, and Gary McKinnon, the real question for the Prime Minister's first official visit to Washington was this: what gift would he bequeath to the White House? In a surprising move, it has been revealed that Cameron gave the President a piece of graffiti art by street artist Ben Eine.

The painting, 21st Century City (pictured), is a typical typographical effort by Eine, who is known for his large-scale words and letters around east London, and recently busied himself by alphabetising the shutters in a Spitalfields street. The artist is said to be a favourite of Samantha Cameron, and is considered a surprising choice because, as the Telegraph soberly reports, Eine has been thrice charged with criminal damage.

The Obamas also chose art as their gift, giving to their British counterparts an Ed Ruscha lithograph called Column with Speed Lines. The kids weren't forgotten, either: Sasha and Malia Obama got welly boots, while the Cameron brood are now the proud owners of DC United football shirts.

The exchange of gifts was a more successful endeavour than the darkly comical events of last spring, when Gordon Brown handed to Obama a pen holder made from the remains of a 19th century clipper, and for his trouble was given a box-set of DVDs — incompatible in Britain, no less — of classic American films. A media-fuelled brouhaha broke out, with certain sections of the right-leaning American body politic seeing it as another sign of their loathed president's malfeasance. Hopefully the shock jocks and Fox News "analysts" won't get so exercised by these gifts.