London Versus The West Wing 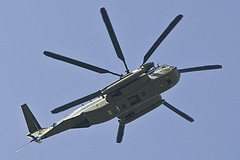 Marine One by BWJones
Can you hear a whiny roar of dissatisfaction outside your window? It's probably the howling and gnashing of teeth that London has engaged in following the meeting between President Obama and Gordon Brown. According to the NY Daily News, the whole of Londinium is "aghast" over the "string of snubs" that the Leader of the Free World administered to our blighted Brown, a series of slaps to the chops that has left our febrile media fuming like the Boston Tea Party had just broken out.

Hacks on newspaper desks have described as "appalling" the treatment shown the PM by the Prez, with sneering directed principally toward the lopsided exchange of gifts: Brown bequeathed Obama a pen holder crafted from the wood of a 19th century clipper, and he was rewarded with a DVD box set of classic American films — as "exciting as a pair of socks", according to the imagination-deficient Mail. "Rudeness personified" was the Telegraph's verdict on the whole debacle. More lip-trembling was to come over the temerity of Obama's decision to send a bust of Winston Churchill (a gift from one T. Blair) from the Oval Office back to Blighty, the wartime leader's less-than stellar record over Kenya cited as one possible reason. And would you believe it, the ruddy Yanks didn't even notice Brown's visit!

The Post also reports that the gifts exchanged for the children of the respective statesmen were lacking in equality — Topshop clobber for Sasha and Malia Obama, versus White House gift shop tat in the form of Marine One models for John and Fraser Brown, gifts that the Times dismissed as "solipsistic". 'Cause of course, the last gift a young boy would want is a model helicopter, how very inappropriate.

The "snub heard around the world"? Londonist must have slept in. These are truly worrying times for our media if they have nothing more to scribble about than a perceived lack of protocol between two leaders who have more weighty matters on their minds. Frankly we'd have been satisfied with a hearty handshake, an exchange of postcards, and a quick settling down to business. That our antiquated political commentators see cause for complaint reveals a little too much about the ostrich-like tendencies of London's media elite.