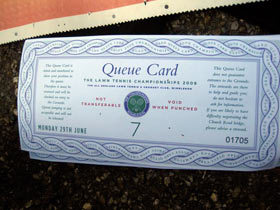 Caroline's queue card from 2009
What with all the palaver about the underperformance of Rooney and co in the southern hemisphere you may find that this year's Wimbledon tennis championships has crept up on you unawares. It starts on Monday morning and doubtless by the middle of Tuesday will be vying with the World Cup for viewing attention in many households.

Of course, there's nothing quite like going along to SW19 yourself for one of the great spectating experiences in sport. It's certainly not too late to get a ticket either, though you'll either need to have a very fast finger or be prepared for a spot of camping.

The basic rules of how it all works have remained very much the same since we brought the All England Club's changes to the system to your attention when they were first made in 2008. (Indeed, the official site is still linking to last year's information). This year we can blend into the main bullet points the experiences of Londonista Caroline who succesfully camped overnight for her Court Two tickets last year. Here's the rundown.

Surprisingly few people know that every evening around 8:30pm about 500 Centre Court tickets are made available via Ticketmaster for the following day's play at £45.10 each. Returned Centre Court tickets may also be available at the same price There is camping overnight in Wimbledon Park for an expected 2,000 people per night. Caroline and friends enjoyed their evening, though, courtesy of some friendly folk with frisbees and volleyballs as well as the handy availablity of burgers, ice cream and decent toilets. Campers are woken at 6am by Wimbledon stewards. Caroline found that, in practice, many wake up with the general hubbub starting at about 5am. Around 7:30, 1,500 or so coloured wristbands are distributed indicating entitlement to a ticket for Centre, No. 1 or No. 2 court. Caroline says she was allocated a court two wristband around nine o'clock despite being about 1,700th in the queue. Her good fortune may indicate that the odds (and times) have changed a little thanks to the opening of the new, larger Centre Court. Caroline was also able to deposit her tent and sleeping bags at the Left Luggage area for a mere £1 an item. At least 6,000, and as many as 9,000, general entry tickets are available, but by 10am there will already be more people than that in the queue. Once inside, very few spectators will leave until after 5pm.

The British Tennis site will help you identify whereabouts in Wimbledon Park to actually find the queue. And if you should discover the England football team's coherence under a bush, please hand it in to the nearest steward.