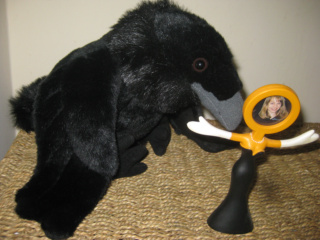 Forget foxes. It's crows you want to watch out for, if an increasingly implausible series in the News Shopper is to be believed. They claim that five joggers have been attacked by a vicious crow over ten days. The angry bird appears to be targeting blondes. According to a local cafe owner:

At first I thought it was just a one off. But then it started attacking another blonde girl who was just running along. The rest of the time it just sits there looking menacing.

Meanwhile, over in Catford, a retired dancer tells how she was assaulted from above (warning: link contains extremely hammy photos).

I got up and started running. I shouted ‘It’s after me,’ and then I fell in the flower bed...Scared would be an understatement. I had to pour myself a brandy.

Now, the deranged corvid is apparently besieging the News Shopper offices, 'screeching and pecking' on their front door. “A lot of the guys here are scared for their lives but it’s me he wants," claims editor Richard Firth.

And they say local news reporting is dying out.