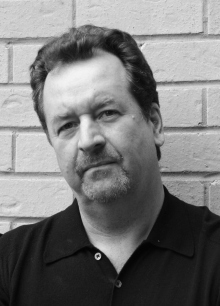 Chris Paling, novelist, has worked in our city for 30 years. The capital is the setting of two of his novels, including the latest, Nimrod’s Shadow, published this month. And yet, he says, “I don’t know London very well.”

The city is “a place I tend to travel through on the way to work”, which in his case means the BBC’s Broadcasting House, where he is a radio producer. Paling lives in Brighton, and has commuted for years by train and (latterly) scooter, two days a week.

So why set novels in London? Writing begins, he says, as “a strange sensory thing. It’s almost like you get a taste or smell of the place.” Thus it was that Nimrod’s Shadow began life with a vision of Riley, a struggling artist, and his dog, the Nimrod of the title, wandering the streets of Edwardian London and (in Nimrod's case) sniffing at fruit stalls.

From there he built up a picture of Riley's neighbourhood, Old Cross, a grimy but vibrant olden day version of Camden. Paling is no great lover of that modern-day suburb, but conjuring up its antecedent was, he says, "almost like creating a version of Camden you want to live in or want to know."

But just because the book is based in London - modern day Soho as well as the imagined old Cross - doesn’t mean the fictional is overlaid with the real. “When you are writing a book, you are living a parallel life, living a piece of fiction in your head,” Paling says. “It doesn’t necessarily anchor into the real world in any particular way. When I walk down Lexington Street, although I know it’s the setting of the novel, it’s a different Lexington Street.”

Research is enormously important, he says. Even fiction must have a basis in truth, to appear convincing and to give an honest account of the period. Novels are "a very partial version" at best; thorough research can help mitigate that.

When writing a previous novel set in Fitzrovia, The Repentant Morning, Paling wrote the first 15 pages in an afternoon and then realised he'd have to spend the next year doing the research. Thus he works: writing until he feels he needs more information, going away to consult archives and reference works, then coming back to the novel.

What he can't stand is novels that flaunt their research. "I discard 99% of what I find," he says. "What I hate about some novels is you can see the research on the page. It really pisses me off. You don’t want to know that. You want to know one factor that will give you a taste of the area."

Paling used to do most of his writing on the train to and from Brighton. "What I tended to do was, on the journey up [to London], I’d revise what I’d written the day before. On the journey down I’d write an hour and a quarter of new material." But that was in the days when carriages were "fairly silent. Since mobile phones, it has been more difficult. I find it very difficult to write on the train now."

He now commutes by scooter, in any case, which gives him a chance to see London at perhaps its most beautiful. "I like it as a place to scoot up at 6am in the morning, crossing over Westminster Bridge. I like to see the city [then]. I like what it does to your soul."

Among his other London loves are its hostelry - "I like pubs, I like writing about pubs. All my books have got pubs in them" - and a previous office in Broadcasting House. "Every night, especially in autumn and winter, you could turn around, put your feet up, and watch the sunset over Fitzrovia ... I like Fitzrovia and I like Soho."

In the end, he says, "It doesn’t feel like my city. Because I have never lived here, I don’t have that sense of ownership. It’s the sort of city that it’s quite hard to feel ownership of." Luckily he owns his fiction.

Nimrod's Shadow is published this month by Portobello Books, price £13.