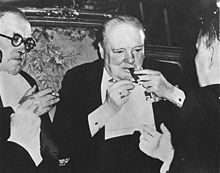 The fussy fulminators in Britain's modern health-and-safety apparatus have never loved the historical irritation that Winston Churchill was a cigar lover. To that end, a portrait at the entrance to a London museum has been airbrushed to remove a cigar hanging from the wartime PM's mouth.

Visitors to Winston Churchill's Britain At War can see a 1948 photo of the then-Leader of the Opposition gazing benignly down at them from the entranceway, his two fingers raised in the V-for-Victory gesture. But where, in the original print, a trademark stubby cigar is clenched in the left corner of his mouth, the new version is cigar-free, with the missing lip airbrushed in, lending Churchill's mouth an uncharacteristic sneer.

The museum has launched a retreat operation worthy of Dunkirk, with manager John Walsh claiming he wasn't aware that the picture had been doctored. Cigar aficionados in London will be entitled to feel aggrieved at such vandalism, with their pastime now hard to practise in public, despite the continued existence of a cigar scene. Despite this ham-fisted attempt to expunge Churchill's cigarophilia and posthumously rob him of his favoured Romeo y Julietas, the great man's bacchanalian philosophy speaks more to modern, hedonistic Britain than our fun-phobic mandarins would like to admit:

"My rule of life prescribed as an absolutely sacred rite smoking cigars and also the drinking of alcohol before, after and if need be during all meals and in the intervals between them."