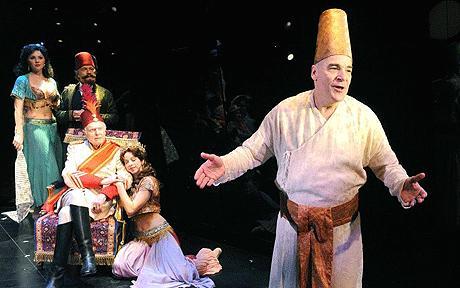 There is an array of all-American talent squished onto the Menier Chocolate Factory stage that is both formidable and incomprehensible. From Mandy Patinkin, arguably the finest Sondheim interpreter of his generation, to Broadway back-catalogistas like Judy Kaye and John McMartin, this is the stuff of dreams for many producers.

Such a pity, then, that they have been assembled, in the no less luminous hands of Evita-to-Phantom director Hal Prince and prima choreographa assoluta Susan Stroman in a complete barrowload of tripe.

It is impossible to fathom what passed through whose mind when it was first suggested that the Shah of Persia’s visit to Vienna in 1873 would make a viable subject for a musical, that modern lyrics could be welded to genuine Strauss tunes, or that it was a good idea to convince Jewish actor Mandy Patinkin to shave his head and play a fey Muslim eunuch.

It’s called ‘Paradise Found’ but the only glancing reference to Milton is that you’d have to be blind to see the good in it.

Whilst Nasser al-Din Shah Qajar was a fascinating and cultured monarch - a painter, a poet and photographer who held sovereign power for almost 50 years, outstripped only by Queen Victoria whose reign ran parallel to his own. He was the first ruler to visit Europe and the first to publish his diaries - but in the Richard Nelson script, he’s a randy one-dimensional buffoon played half a degree above Baron Hardup and in a series of cheap lurex kaftans by five times Tony nominee John McMartin who looks understandably bewildered throughout.

The gist of the plot is that the Shah becomes infatuated by the Empress of Austria, and demands his servants procure her sexual favours. To spare the court’s blushes, a prostitute masquerades as the Empress and receives from the Shah a massive pearl necklace. Two, if you count the one she can wear in the street.

In the second half those of us who returned to the airless auditorium were rewarded with a further descent into farce as first there’s a prison scene where the prostitute is reunited with her favourite client, a cardboard Baron played with more conviction than the production deserves by the explosive bass-baritone talent of Shuler Hensley. Hensley is most noted in the UK for his outstanding portrayal of Jud Fry in the National’s Oklahoma! where he briefly but powerfully diverted the audience’s attention from its seat-wetting adoration of Hugh Jackman, and subsequently in a string of Broadway hits including playing the Monster in Young Frankenstein.

She’s been in prison, he in alcoholic penury, but they come together as actors in a coarse vaudeville which summarises the plot all over again only to oom-pah-pah music, after which the authors clearly got bored with the plotting and tie up all loose ends in a single scene's worth of provincial pantomime. Three Strauss strains are briefly reprised - even though we’re all now back in Persia - and we stagger out to the bar to try to make sense of it all.

It's worth noting this is not the same sort of home-grown Menier production as Cage aux Folles or Sweet Charity, but an American-imported different sort of brown substance in a Menier chocolate wrapper.

You have been warned.

Paradise Found continues at the Menier until 26 June, Tuesdays to Saturdays at 8pm, matinees Saturday and Sunday at 3.30pm. Tickets online here, or box office 020 7902 7060, all standard tickets are now £32 plus transaction charges. Be aware that sides of the auditorium near the front have a very oblique view of the stage, but are charged at full price.