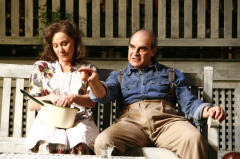 "I'm his father, and he's my son, and there's nothing bigger than that," says dad Joe Keller at one point during Arthur Miller's classic All My Sons.

But as this tightest of plays moves on, you begin to realise there are many things bigger than the simple, but sad, family drama about a son missing in action. This new London production of All My Sons takes Miller's incredible masterpiece of a script and polishes it to a unforgettable shine. London's cinemas might be full of summer blockbusters: here's the West End theatre equivalent.David Suchet leads the cast as Joe Keller, the personification of the American dream. Keller was accused of producing damaged aeroplane parts during World War II, inadvertently causing the deaths of 21 pilots, but was exonerated while his business partner went to jail.Here, Poirot's lovable bonhomie is rounded into wonderful welcoming energy - he trips lightly around the stage, his front garden, a generous patriarch with an entirely believable line in self-deception. Indeed his "talent for ignoring things" is so complete, once this greek-tragedy-esque play starts to unravel this world, there's something deeply unsettling about watching his downfall. Suchet seems to physically shrink; his neck thins, his head turning, uncomprehending, like a tortoise in a trap.Suchet's fantastic performance here is more than matched by Zoë Wanamaker playing Joe's wife, Kate. Kate refuses to believe their missing son, Larry, is dead, and is horrified by the idea that Larry's fiance is moving on, and perhaps planning to marry her other son, Chris.Wanamaker is an incredible presence on stage, turning the tense atmosphere of the play with a line, or a look. It's not often this londonista gasps at a single sentence in a theatre. When an actress has brought you entirely into her trust with a flirty, amicable resolution to all the problems you've sat, clenched in your seat, worrying about, only to shatter them with one phrase, it's quite something. "Oh, thank god," you think, "Everything's going to be alright." Then, "Oh, shit. No, it's not."Happily, these two consummate performers are surrounded by other fantastic actors. Jemima "As If" Rooper is great as Ann, the pretty young fiance. And Stephen Campbell Moore must be congratulated for keeping up the tension of the piece as Chris. It's not easy to do angry, then angry again, then furious, but he manages it wonderfully.There's nothing tricksy about this production; no video, no clever staging, no modern additions. Played on an incredibly realistic set (real trees and grass everywhere!), and gorgeously lit, it's as straightforward and simple a play as you're likely to see in the West End. But in its short 2 hours 20, it'll take you through incredibly complex questions about life, death, family, responsibility, war, money, society and more. We loved it.All My Sons plays at the Apollo Theatre until 11 September. Tickets are a pricey £55.50, £45.50 and £31 - hunt around for offers. Visit www.apollo-theatre.co.uk for more information.