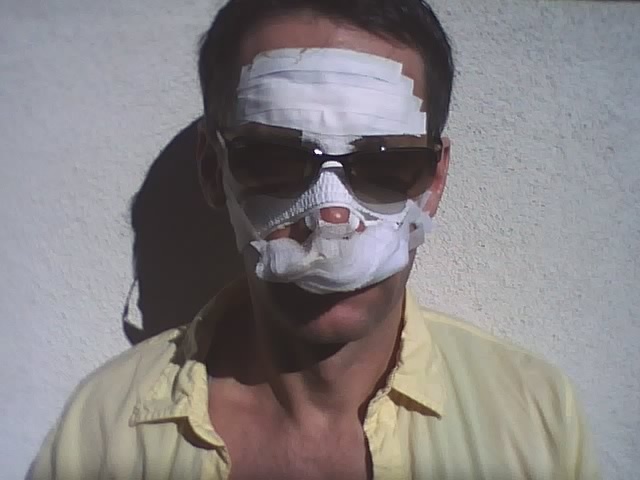 Behind American comic, Scott Capurro's fearless and provocative brand of comedy lies a sharp, subtle wit and a warm heart. Not that the latter is obvious mind, as anyone in the front row will tell you! With absolutely no subject off bounds, Scott has a tendency to upset his gay counterparts far more than the rest of the audience, but he tries to include everyone. Going deeper than just shock-value, Scott's act has earned him a reputation as one of the finest stand-ups around and he is also a respected actor, author and playwright. As we sat nervously at the front of his comedy chat show we found him endearingly shocking, extremely funny and a master of dead-pan. It was with some trepidation that we set about asking him some questions... Raised in San Francisco, you were originally an actor and appeared in the hit films Mrs Doubtfire (Aunt Jack) and Star Wars: The Phantom Menace. How did you end up as a comic living in the East End of London?There's a lot of work for comics in London; the East End is the most affordable central London location I could find. And I have a lot of friends living nearby. (Read: poor artists.)Your material could be seen as pretty controversial and offensive. Has it got you into any scrapes and, if so, how do you deal with the fallout?Most audiences play along. I guess some people might be offended but then the great thing about comedy is there's something offensive for everybody! Women get nasty, because it's a comedy club, and all nastiness is allowed. Or should be. After 20 years in comedy I consider babysitting one of my greatest talents, so I have restrained some people, and I've been strangled, but nobody ever said jokes were popular.Generally, what response can you expect from a London crowd? Do you use the same material here as you do over the pond?I use the same material everywhere. Comedy, like love, is on TV, so it's universal. The response I expect is laughter. The English find this embarrassing, I know, so I depend on Polish tourists.Have you got any particular favourite comedy venues here in London, and where do you head out to after a gig in the capital?In London, I like the Balham Banana, and the Soho Theatre is a great venue. Of course the RVT in Vauxhall is one of my favorites as well. Headliners in Chiswick is lovely. I'm sure I've left some off the list. I really only play venues I like. I'm too old to wrestle with a rotten room. After a gig, I go home. Again, I'm old.What do you think of London's gay scene?I don't know the scene. I read..Are you playing any of the fringes this year?The Camden Fringe is fun. I'm doing that.Scott Capurros Postion, your live comedy chat show at The Royal Vauxhall Tavern, was a roaring success and with guests such as Vivienne Westwood, Stephen Merchant and Matt Lucas keeping you company. Is their another series coming up and who are you going to be asking along?We're just now creating another series, starting September 30 and running every Thursday for 6 shows. We've not got a guest list yet, but it should be exciting. I really enjoy the chat show format, and even if i shared the stage with David Mills every week and no one else, that would be enough for me. He's very funny. The audience might not come along, but we'd have some laughs.We hear you're a big yoga fan - do you just like being bendy or is there more to it than that?I like having a calm mind, and yoga helps with that. I also have old injuries which resurface when I skip my practice, so I try to do at least 90 mins every day. Keeps me sane.Have you ever been sick on the tube?I prefer cabs darling. They're the only public transport I support.Tell us a London secret?Less than 2 percent of the population are foreign born.Scott Capurro plays the Camden Fringe, 13-15 August 2010, Roundhouse, Camden Fringe