The Maritime Galleries: Shipwrecks In The Round Pond

By Londonist Last edited 151 months ago
Londonist The Maritime Galleries: Shipwrecks In The Round Pond 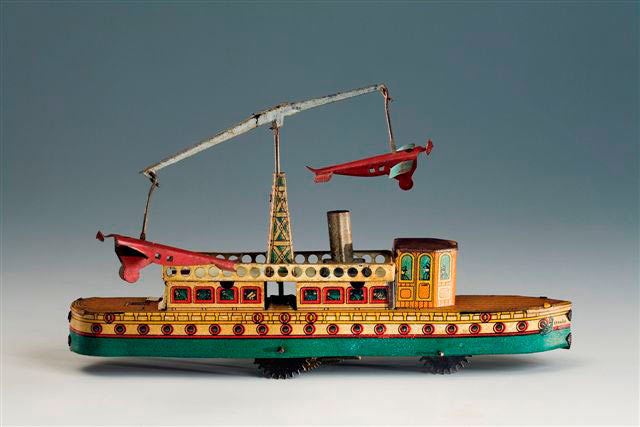 In the second of four posts on our Museum of the Month - The Maritime Galleries - we take a look at the new Toy Boats exhibition that curator, Kristian Martin, enthusiastically showed us around:

The exhibition charts the development of Toy Boats built by European manufacturers from 1850 to 1950. During this time the nations of Europe competed to build the biggest, fastest boats and the most effective floating killing machines. At the same time toy manufacturers built ever more lavish and resplendent models.

All the models are wondrous in their own right, but as ever, we were there to sniff out the Londony aspects, so we asked Kristian what he could offer us. ‘Not much’ was his initial reply, but then came the back story behind one of the pictures - sadly we can’t re-produce it here for you, so we’ll describe it with words: picture a grainy black and white print of the Round Pond, drained; there’s a gentleman, ankle deep in mud, proudly offering up the wreck of a toy boat that protrudes from the silt. The Round Pond is drained periodically and in the draining of 1923 a haul of 150 vessels were found languishing in the pond bed. Why would they sink? One reason, according to Kristian, was that the keyhole (keys wound the propellers of some boats) was often prone to leaking. We enjoyed picturing the young, privileged kid standing on the bank watching his boat go down while no doubt his father’s heart sank at the thought of shelling out for another pricey toy to replace the hapless shipwreck for them.

Brilliantly, there is still a model boat club in operation at the Round Pond under the aegis of the Model Yaught Sailing Association. For more history on sailing in London parks, check out their site.

Another item that caught our London eyes was a reproduction of a Gamley’s toy shop poster. Heard of Gamleys? Apparently it was a chain of shops and the Holborn branch was a store of some splendour that rivalled Hamley’s in its day. Alas, it wasn’t enough of a rival and Hamley’s now reigns supreme and you can see why when you read the slogans they used to entice the youngsters back in 1935:

‘ “A boat of my own” - MAGIC WORDS, but ones which can easily come truecome to our boat department and we shall be delighted to show you our new designs”’

Browse past Museum of the Month entries.