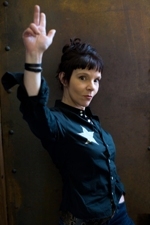 Isabel Monteiro by Katja Medic
We've rarely seen a crowd and audience more excited about a comeback gig than for Drugstore's sold-out do last week. If there is such a thing as good natured tension then the air of the ICA was dense with it.

Support comes from Dry the River, an amiably English take on the close-harmony back-woods Americana that Fleet Foxes do so well - there is even a fox beard on the bass player, with some rockier outcrops amongst the thick trees.

Drugstore arrive in darkness and burst across the stage, one guitarist all cool Brazilian confidence, the other bursting with wet-eyed nerves and enthusiasm beside sinewy sex-sprite Isabel centrestage. Her voice is soaked in wine and cured in smoke. It has depth and strength and yet verges raunchily on the edge of guttering out. Between every other song she swigs wine from a bottle like a mad auntie at her favourite nephew's wedding and it's all genuine, not cod rock posturing, planned like some media-eyed smart missile.

Drugstore's music is passionate indie rock. Some songs drift like dreams, others pound like blood vessels when you're in the midst of something exciting and filthy. They're somewhere in the same crazed town as the Tinderstick, Eels, Bad Seeds and other eclectic bands. They're a little bit country, a little orchestral, a tiny bit tango and a lot of bluesy rock ‘n’ roll. "Say Hello" comes across as a manifesto for all of London's burnt outsiders with the gleam of a Tijuana trumpet shine on it. Cellists and pianists come in and out for different songs. The encore is their best known song "El President" which, despite the absence of Thom Yorke, still brought goose pimples to the skin with its cello swooping like helicopters and breathy, beautiful vocals.

And in the midst of all this someone still heckles Isable the, then forthcoming, election. She masterfully hushes them until the end when she discusses her own voting plans before sidetracking herself into confessing sexual fantasies about Gordon Brown.

It's a night of joyful music punctuated with Isabel announcing mid-set that Drugstore are off to Glastonbury. Yet to secure a new record deal, let's hope we witnessed the night Drugstore leave the bosom of their faithful fans and paint the wider musical town a deep wine red.