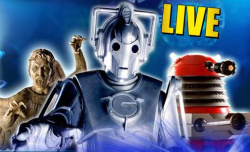 An official BBC stage version of Dr Who will begin its 25-date tour at Wembley Arena. Dr Who Live will see the time travelling fringemeister and companion Amy battling against Daleks, Cybermen and Weeping Angels.

The story, penned by Who supremo Steve Moffatt, will be partly set in wartime London (again!) and feature on-stage special effects and a 16-piece orchestra.

Sadly, lead actors Matt Smith and Karen Gillan will not be there in person, but will pop up in specially filmed sequences throughout the show.

The Wembley performances (assuming they're not actually in Cardiff, made up to look like Wembley) run on 8-10 October, before the moneyspinner moves off on a nationwide tour. Tickets go on sale first thing on Friday morning.