Crossrail: To Cut Or Not To Cut 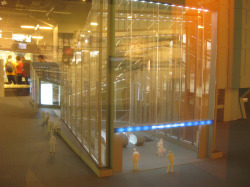 Image by M@ from the Londonist Flickr pool
There's confusion - oh, when is there not? - over the future of Crossrail. Reports yesterday suggested that up to £5bn could be taken out of the budget (massive national deficit, coalition government, etc; we'll be the ones in the corner rocking and singing softly to ourselves for the next five years, OK?) and speculation over where the axe could fall took in the spurs to Maidenhead and Canary Wharf, or even the stations at Bond Street or Tottenham Court Road.

But TfL today says "this story is just pure speculation", and we can hardly see TCR being junked when so much of the surrounding area's already been knocked down (the Astoria surely did not die in vain?). Boris is also on the warpath: the Standard quotes him as saying "London needs Crossrail lock, stock and barrel... I caution my friend the Chancellor not to start gutting this vital infrastructure project" but also mentions "if there are sensible efficiency savings to be found, we will find them", which could mean anything, really.