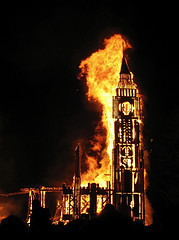 "The clock tower, 320 feet in height, has just fallen to the ground, together with the famous clock Big Ben, which used to strike the hours on a bell weighing nine tons,” so proclaimed Ronald Knox in a radio news hoax that predated the famous Orson Wells War of the Worlds stunt by 12 years. A new web essay by Paul Slade picks apart this mostly forgotten incident from the early days of broadcasting.

Knox, speaking in the clipped tones of a pre-war BBC news reporter, convinced thousands of listeners that an angry mob of communists had blown apart the famous landmark. His 1926 show, Broadcasting the Barricades, also claimed that a knight of the realm had been 'roasted alive' in Trafalgar Square and a minister strung up in Vauxhall Bridge Road.

Despite numerous clues that the announcement was a spoof (not least, a clear disclosure at the start of the programme), many people were convinced by the jape and made anxious phone calls to the authorities for clarification.

It's an illuminating story, which reveals plenty about the attitudes to authority of the time. But it also serves as a warning about the potential misunderstandings a new broadcast technology can foster. For anyone who's ever watched a Twitter rumour snowball out of proportion, the parallels with our own time will be obvious.

Slade's site is full of fascinating London nuggets, including an essay about London gallows ballads we highlighted previously. Go bookmark.