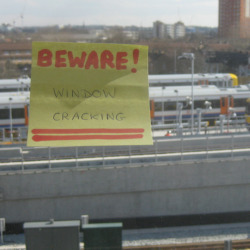 Image by Matt From London
We've previously reviewed the window display at Selfridges, but that was Christmas a long time ago. We're fizzing with excitement at today's announcement that Selfridges will reveal a brand new themed display just riddled with celebrities.

Dizzee Rascal, Florence Welch, Hot Chip, Empire of the Sun, Paloma Faith, The XX, Marina and the Diamonds have all been invited to create window displays for Selfridges, to fill Oxford Street shop front with lyrical power made into visual montages. Each artist (so broad a title, isn't it?) will use one of their own songs as the starting point for their display, and we can't wait to see what each one does with this souped-up version of a primary school shoebox diorama competition. There may be fewer pipecleaners and a few more diamond-encrusted watches but creativity has to work with what is available.

The displays are scheduled for May, coinciding with festival season and the assumption that all hip kids with money to burn and ear drums to burst will be out and about, soaking up music and music-themed shopping enticements. The cynical among us might say "so what?" to Selfridges' faddish scheme - after all, having a great voice and a knack for writing catchy tunes does not automatically translate into a gift for sublime window decoration. But the cynical thinking such thoughts should allow themselves to be swayed by the magic of Mannequin, that 1987 movie about supernatural window dressing and therefore turn cynicism into eager anticipation for these displays. Watch this space, and indeed, watch the Selfridges window display spaces.