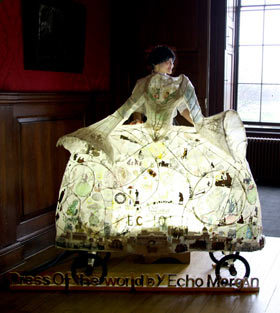 Echo Morgan in 'Dress of the World'
Despite having been open for only a few weeks, the new 'Enchanted Palace' exhibition at Kensington Palace has already attracted widespread praise. Exploring the lives of the seven princesses who once resided there through ingenious installations in the state rooms, the exhibition will have you wandering spellbound through the palace and will make you look at the lives of these historical figures in a completely different light.

Although it features big names such as Vivienne Westwood and William Tempest, other artists, such as Echo Morgan, have also made fascinating contributions which mark them as the potential future stars of London's art and fashion scene. We were recently lucky enough to be able to talk to Echo about her role in the exhibition, which is open until January 2012, and she has also kindly provided a printable guide to her 'cabinet of curiosities' which you can take with you when you go to the palace.

Tell us a bit about yourself.

How did you get involved with ''Enchanted Palace?

The director of Vauxhall Fashion Scout, John Walford, recommended me to Kensington Palace because he liked the cross media element in my illustrations. I was taken around the palace by the curators and later invited to put a proposal together as creative director. Although I knew that the role was too big for my knowledge and experience, especially as at the time I didn’t have a team of people in place, because I loved the concept of the project so much I decided to put together a design proposal entitled “My Vivid Dream”. The result was that I didn’t get the creative director position but became one of the only non fashion designers to choose my own room to create an installation.

What has been your contribution to the project?

My installation looks quilt minimal but the more carefully and harder you look the more stories you discover. I ultimately curated a group contemporary art show inside the imposing black ‘Cabinet of Curiosities’ and I hand-made a bright lantern mantua “Dress of the World”.

The true stories in the palace and the historical building itself.

My room is called “A room of the world; A world in a room” and the fairytale behind it is “The princess who collected the world” inspired by Queen Caroline of Ansbach, the queen consort of King George II. She always surrounded herself with artists, writers, and intellectuals. She collected jewellery, acquired important portraits and miniatures, and enjoyed the visual arts. Thus the cabinet is like a modest king who kept everything inside and the dress is the show-off queen who uses the world’s colour to decorate her beauty.

In China we make paper clothes and houses for family members who have passed away as a mark that we wish them to have the same quality of life as us and, moreover, one of my favourite items in Kensington Palace was a 18th century mantua. Thus I made my lantern dress based on the same shape: I see my bright lantern as a kind regard for all the princesses who lived in there.

Who were your favourite people to work with?

I really enjoyed work with the WILDWORKS team, as they are the theatre and production company for the Enchanted Palace. Because I have never done willow sculpture before I went to Cornwall where WILDWORKS are based and stayed for three days with the creative director Bill Mitchell and designer Sue Hill. They are such a lovely couple and live in an enchanted house! They’ve shared love, intelligence and creativity for the past 30 years and I have learned so much from them.

Great! I miss it now. It was very special to wake up in the morning and think “I have a studio in Kensington palace”. Everyone in the palace called me the Chinese Cinderella because I always left the palace last. The wardens told me that if I heard anything in the dark, It was George ll having a walk. So there is a ghost!

Where will you go from here?

Who knows! Hopefully more exciting projects, but right now I am enjoying my Easter break from college.