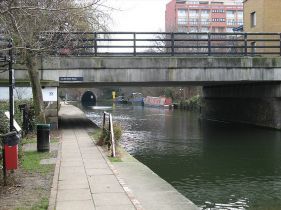 Image courtesy of 1gl under a creative commons licence
Londonist hits the campaign trail in a key Labour/LibDem marginal.

Somewhere behind the flat's front door, something the size of a Mondeo is barking very, very loudly. "I'll probably get savaged by a dog now," Mihir mutters through a frozen smile.

He doesn't, of course: the voter within helpfully restrains the beast for a moment, so he can explain to the prospective Liberal Democrat councillors for Caledonian ward what exactly has gone wrong with the world.

In fact, what strikes you most when watching the canvassers at work is how friendly the electorate actually are. Some shake their head; a few old ladies peer nervously from behind a curtain. But by and large, it seems, people are quite happy to open their door to a complete stranger, tell them who they're going to vote for and rant at length about their reasons why. At least someone's bothering to listen.

Tonight the LibDems are out in force on the Westbourne estate, a grim looking development wedged between the Georgian opulence of Barnsbury and Pentonville Prison. This is a couple of weeks ago now - before Cleggmania unexpectedly kicked in - and the Westbourne doesn't look like a place where the priorities will be scrapping Trident and electoral reform.

But still, there's a sense people are open to the idea of a LibDem MP. Most of the voters they talk to admit being fed up with the government; a fair few pledge to back the party's candidate, Bridget Fox. On Roman Way, a diminutive man in his thirties grabs Mihir's arm and asks, plaintively, who he should vote for. After a brief and unbiased conversation, he comes to the conclusion that the LibDems will do him nicely, and goes away with a stack of posters. A couple of bored looking Asian boys from the estate are even more enthusiastic, trailing the campaign team for the better part of an hour to hand out flyers and yell helpful slogans like, "Vote Liberal Democrat or I'll slap ya!" (Most of those they canvas are too young to vote, alas.)

And there's a quiet confidence among the party's young activists: in an unguarded moment Dom, who's managing the campaign this evening, admits that, yes, they expect to win. In fact, he says, it's the estates that should swing it for them. Islington's richer districts are rammed with millionaire socialists, he complains. It's in places like the Westbourne, that feel Labour no longer care and the Tories never did, that opportunities for third parties are opening up.

This, says Labour, is balls. In fact, claims incumbent MP Emily Thornberry, it's the younger, more affluent newcomers to Islington that are propping up the LibDem vote. (Their social lives, she complains, make them annoyingly difficult to canvas.) It's places like the Westbourne where people really appreciate what a Labour government has achieved. True to form, large chunks of the estate pledge to vote for her, too, and her supporters have an air of enthusiasm that Gordon Brown would kill for.

Given how close the seat looks - there were fewer than 500 votes in it five years ago - Thornberry is surprisingly confident. The LibDem vote in 2005 was boosted by the Iraq War, she points out. "That's not a factor any more. Before the Clegg bounce we were on course for a good win. Now, it's... harder. But we're still heading for a win."

There are three things she hopes will swing it for Labour. One is the ground war: Labour, she hopes, will do better at getting the vote out in places like the Westbourne, to counter the vote in richer wards. (Her activists, it must be said, skew older than the LibDems'.) Another is tribalism: she tells a story of one angry voter who actually got as far as taking a LibDem placard for the front garden, but found she couldn't bring herself to put it up. In the event, she was finally forced to admit to herself that she'd vote Labour after all.

A third factor, though, is that the LibDem have had ten years in charge of the council to piss off the electorate. And Labour, who hope to retake the borough, have been enthusiastically reminding people of this fact.

This line of attack seems to have some resonance. One voter in Caledonian ward, asked to support the LibDems, launches into a rant about the council's uselessness in fixing his heating. "And did your Labour councillors lift a finger to help you out?" Bridget Fox prompts helpfully.

"Yeah, they were the ones who came round and sorted it out!"

"Well I have to tell you that my Labour councillors are absolutely useless," Fox replies primly, as the voter slams the door.

Dom dismisses comparisons between his party's incumbency in Islington and Labour's at Westminster. The LibDem council has a mixed record, he concedes. "But I don't think we've made any mistakes here on the scale of the Iraq War."

"Er," he adds after a second. "I don't mean we're going to invade Hackney or anything."